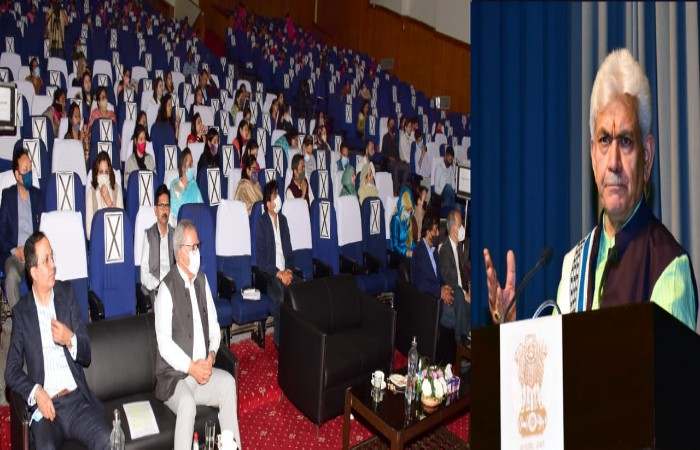 Assures equal opportunities & widening women’s sphere of activities so that their special talents and experiences could enrich J&K’s economy and public service
We aim to engage more women in fields where they are less in numbers, says the LG
LG stresses on more participation of Women in J&K’s workforce

Lieutenant Governor, Manoj Sinha today called for creating a Gender Neutral Ecosystem in J&K where the women can choose any profession, job or business.

The Lt Governor was speaking during an event held at General Zorawar Singh Auditorium, Jammu University to celebrate International Women’s Day.
Speaking on the occasion, the Lt Governor assured equal opportunities and widening of women’s sphere of activities so that their special talents and experiences could enrich Jammu & Kashmir’s economy and public service.

The soul of a country and society is poor without the invaluable contribution of women. Our collective effort is to provide advanced education, modern facilities, and support in every sector so as to enable women to make the best contribution towards the common good, observed the Lt Governor.

We aim to develop an environment, in work places from government departments to the corporate world, to engage more women in the fields where they are less in numbers, observed the Lt Governor.

There are many examples of women achievers who fought all odds and overcame all barriers. Today, women are breaking many stereotypes by doing some exceptional work in the field which once was considered being only for men, said the Lt Governor.

Speaking on the importance of gender neutrality, the Lt Governor made a special mention of Ms. Pooja Devi, the first female bus driver of J&K and expressed his happiness that women of the UT are breaking barriers.

After seeing the determination of Pooja Devi, we have decided to make an addition in the notification for recruitment of Government Bus Drivers (which is gender neutral) and add a line that women can also apply for this post, said the Lt Governor.

There is a mindset that for the recruitment of drivers, only men can apply. This thinking has to be changed, he added.

Women are no less than men. The Government is committed to providing equal opportunities to women. Men and women both have to work collectively to take J&K to new heights of development, the Lt Governor maintained.

The Lt Governor further called for more participation of Women in J&K’s workforce with the help of Mission Youth, Himayat and Skill Development Centres.

The Government is working on the lines of Jan Andolan for the social and economic upliftment of women. From entrepreneurship to education, we are giving financial assistance to the women so that they can become financially and socially independent and can contribute towards economic development of J&K, said the Lt Governor.

He said that women in J&K are being empowered through several government-run schemes as the changes are visible on ground and added that the efforts of different government departments and agencies to empower women are bearing fruits with noticeable changes.

Emphasizing on equal participation of women in every aspect of life, the Lt Governor stressed on making J&K women financially independent; increasing women participation in leadership roles, and putting more focus on security and health.

Underscoring various initiatives taken by the Government for economic empowerment of women, the Lt Governor said that during the Mumkin Programme, mini-commercial vehicles with zero margin money were made available to the beneficiaries and we have kept it gender neutral.

J&K has a long history of women empowerment. For decades, the women folks of J&K have made significant contributions to keep the culture and traditions alive, said the Lt Governor.

The Lt Governor appreciated J&K Women’s Development Corporation for working dedicatedly for the welfare of women. He asked the nodal department to distribute informative publications about women achievers of J&K and showcase their life history through plays in school and colleges.

To fill the skill gap, the Lt Governor called upon the private stakeholders for imparting on-job training to women.

Noting this year’s theme of International Women’s Day – “Choose to Challenge”, the Lt Governor suggested that Women Development Corporation should develop a platform to connect academia with industry, NGOs and Private sector and start a “Champions for Innovation” program.

Speaking on the occasion, Sh. Farooq Khan, Advisor to the Lieutenant Governor said that celebrations of International Women’s Day is one among the many steps taken towards the ultimate empowerment of women.

DG Women & Child Development, Mir Tariq Ali gave an overview of the department and various schemes being run to empower the women of the Union Territory.