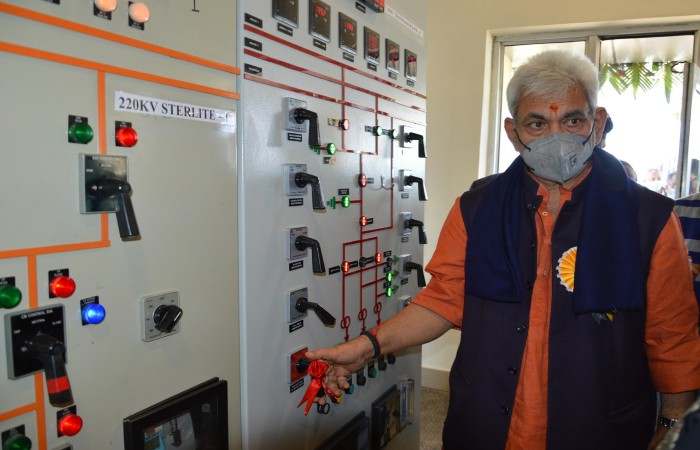 Bottlenecks creating power crisis in winter season are being identified and subsequently eliminated: LG
We are focusing on developing better Power Distribution and efficient Power Transmission system in the UT: LG

In a major push to strengthen the power infrastructure in the UT, Lieutenant Governor, Manoj Sinha today e-inaugurated 17 Power Projects worth Rs. 118.91 Crore at Delina, Baramulla.

Speaking on the occasion, the Lt Governor observed that the inauguration of new projects is another step towards developing better Power Distribution and efficient Power Transmission system in the region.

To realize the vision of making J&K Power surplus, Rs 54,000 Crore worth power projects have been approved which would generate 3500 Megawatt in three to four years, the Lt Governor observed.

The Lt Governor underscored that determined efforts are being made to reach out to all the unconnected habitations, besides providing 24×7 quality electricity to the people of J&K.

He added that the Government is taking many short terms, medium term, and long term measures to provide the people with quality power supply round the clock in the coming two years.

Power sector now has an increased Budget of Rs 120 Cr, taking the total to Rs 2728 cr. New projects are being completed and added to the existing grid.

Several bottlenecks causing delays in the timely completion of augmentation and restoration works of various power projects and creating power crisis in the winter season are being identified and subsequently eliminated, the Lt Governor maintained.

Responsibilities are being fixed and experts from power sector were roped in to provide vital inputs for mitigation of power related issues, he added.

Meanwhile, Sh. Baseer Ahmad Khan, Advisor to Lt Governor gave a brief scenario of the power sector and highlighted the measures taken by the department to augment the power infrastructure in the UT.