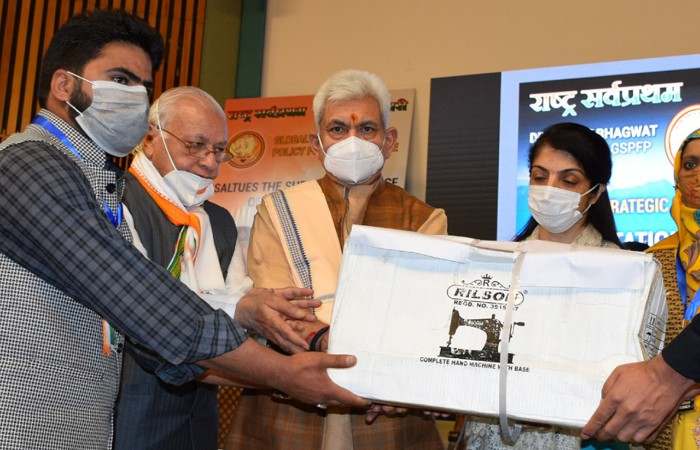 Family members of India’s brave-hearts are the living example of patriotism and sacrifice: LG

Lieutenant Governor, Manoj Sinha today honoured the Next of the Kin of Martyrs of security forces in a programme organized by Global Strategic Policy Foundation Pune (GSPFP), an NGO, here at the SKICC.

Lieutenant Governor, Manoj Sinha was the Chief Guest on the occasion, while Sh. Arif Mohammed Khan, Governor of Kerala, presided over the function.

Speaking on the occasion, the Lt Governor paid glowing tributes to the sacrifices of security forces, police personals and civilians in protecting the territorial integrity and fighting terrorism in the UT of J&K.

“I bow to the martyrs who displayed indomitable courage and bravery while protecting the dignity of the nation, and salute the sacrifices and patience of the family members of our gallant security personnel”, said the Lt Governor.

The Lt Governor noted that the supreme sacrifice made by all the martyrs and the fortitude of their family members is a great source of inspiration and a guiding light for our new generation.

The family members of India’s brave-hearts are the living example of patriotism and sacrifice, and we have to take inspiration from them and move forward together for building a new Jammu and Kashmir, the Lt Governor added.

The Lt Governor urged the people, especially the young generation to discharge their duties with full responsibility to create a peaceful society and pay a befitting tribute to the sacrifices of our martyrs, he added.

“Let us all tread the path of peace & fulfill our Martyrs’ dream of a peaceful, prosperous and developed Jammu & Kashmir”, said the Lt Governor.

The stories of valour of brave hearts like Brigadier Rajinder Singh, Maqbool Sherwani, Lance Naik Nazir Ahmad Wani and heroes of Kargil and Siachen, Chuni Lal, Abdul Hameed, Sageer Ahmad Pathan, Mohammad Yusuf, is our real heritage which will continue to inspire the generations to come, he added.

The Lt Governor also remembered Major Sushil Aima honoured with Kirti Chakra, who was martyred in the Poonch sector while combating Pakistani terrorists at the age of 32 years.

Speaking on the present developmental scenario of J&K. the Lt Governor observed that since 5th August 2019, J&K has been fully integrated into the mainstream of the nation. For the last seven decades, the common people, farmers, youth of J&K have been kept away from prosperity and development.

Under the leadership of Hon’ble Prime Minister, Narendra Modi, Jammu and Kashmir is witnessing a new dawn of development, observed the Lt Governor.

The rights of weaker sections are being safeguarded. For the first time since independence, forest dwellers are being given their rights, besides the rights of youth, children, women and senior citizens are being ensured, he added.

Highlighting the efforts of the government to create a just and equitable society, the Lt Governor maintained that the benefits of reservation are being extended to the disadvantaged sections.

For the first time in the history of Jammu and Kashmir, a sweeper’s son or daughter can see the dream of pursuing any professional course in the UT and subsequently rise to the highest echelons of power. Now, even a farmer irrespective of land holding can do high density plantation, added the Lt Governor.

Many generations spent their lives strangling their dreams despite receiving higher education. Decades later, there is a moment when the youth are dreaming of better tomorrow, the Lt Governor maintained.

Speaking on the initiatives taken by the Government for providing better livelihood opportunities to the youth, the Lt Governor said that more than 18,000 young boys and girls from far flung villages have been provided with the financial support under Back to Village programme to fulfill their dreams and today they have become entrepreneurs.

A workshop on Youth Engagement and Outreach in the UT was organized on 31st October last year, which was attended by top Industry Heads and Policy Analysts from across the country. The outreach programme was aimed to create opportunities and infrastructure for engaging around 75% of the youth in the next 5 years. A few days ago, Mission Youth in collaboration with Bombay Stock Exchange has initiated a skill development training programme in banking and financial services. Two CIIIT centers have been set up in Baramulla and Jammu in collaboration with Tata Technologies, he added.

On women empowerment, the Lt Governor observed that the abilities of women and the merit of their great leadership have a rich history. He saluted the women of the Women’s Self-Defense Corps, who during the tribal invasion in 1947, by creating the world’s first woman guerrilla force, gave a message that Jammu and Kashmir was much ahead in the direction of women empowerment.

The true tribute to the sacrifice and bravery of the women here will only be paid when we are able to create a suitable environment for them to fulfill their dreams, he maintained.

We are moving towards creating an ecosystem of women entrepreneurs and returning economic freedom, the freedom of earning to the women folks of the UT through planned programs like the Tejaswini scheme, launched on the occasion of International Women’s Day, said the Lt Governor.

Underscoring the revolutionary measures taken for the prosperity and development of J&K, the Lt Governor observed that the Central Government has approved an unprecedented Rs 28,400 crore New Industrial development scheme for Jammu and Kashmir, which would attract huge investment of Rs 25,000-30,000 crore, besides providing employment avenues and opportunities to around 5 lakh youth.

Recalling his interaction with the media persons in the recently held Press Conference, the Lt Governor said that the minimum requirement of a civil society was not fulfilled in seven decades. Corruption had devastated Jammu and Kashmir. Even today, 973 villages remain unconnected with the road.

Terming the Rs 1,08,621 Cr Budget approved by the Central Government for J&K as historic, the Lt Governor observed that the quantum jump in the allocation of Budget in all sectors itself speaks about the strong resolve of the Hon’ble Prime Minister towards the development of J&K.

We have made the working of the government completely transparent and accountable. It is being ensured that the work is being done on ground and the money is utilized for the welfare of the people without discrimination, he added.

Now, the development process in J&K has been accelerated. In the coming two and half years, the population living in the villages will be connected with all the basic amenities. The Power sector has witnessed a paradigm shift. Metro projects in Jammu and Srinagar cities will be completed by 2023, he maintained.

Speaking on the growth potential of the UT, the Lt Governor observed that Jammu and Kashmir has endless possibilities. We are trying our best to create a prosperous environment for the people with these infinite possibilities, added the Lt Governor.

The Lt Governor observed that the celebrations of ongoing Azaadi ka Amrut Mahotsav holds the spirit of freedom movement and expresses gratitude to the martyrs. This feeling should be reflected in our national thinking, philosophy, religion, thought process, and development efforts, he added.

The Lt Governor also spoke on the Black Day observed on 22 October in J&K, where a two-day National Symposium and Exhibition on the “Memories of 22 October 1947”in collaboration with the National Museum of History, Art, Conservation and Museology was organized in Srinagar to educate the young generation of Jammu and Kashmir about the sacrifices of our brave-hearts.

The Lt Governor also paid tributes to the security personnel who attained Martyrdom in Chhattisgarh while fighting Maoists.

Arif Mohammad Khan, Kerala Governor, in his address, said that Kashmir has remained home to diverse religious and cultural influences which have deeply enriched its pluralistic ethos and violence has no place in any civilized society and peaceful co-existence is the best means to resolve problems.

He also hailed the initiatives taken by the Jammu and Kashmir administration in the recent past to uplift the socio-economic conditions of the people.

Speaking on the occasion, wife of Ashoka Chakra Awardee, Lance Naik Nazir Ahmad Wani, Smt. Mehjabeen Akhtar said that for a soldier, there is nothing greater than his country.