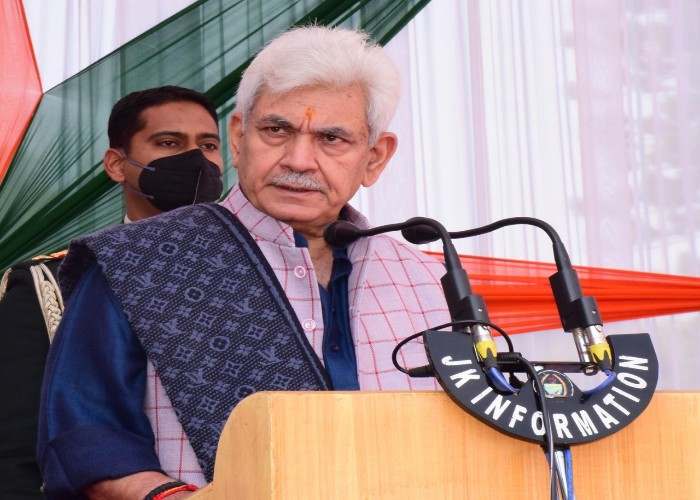 During the interaction held in the lawns of Raj Bhavan, the Lt Governor congratulated the Cadets, and lauded the hard-work and commitment of the cadets and their training instructors who, despite challenges from the pandemic were well trained for RDC events at New Delhi.

The Lt Governor said that the invaluable experience that the cadets of the RDC contingent have gained during the Republic Day camps will prove beneficial for them in building a successful future.

“NCC cadets are icons of discipline and leadership with unwavering commitment in nation-building”, the Lt Governor added.

The Lt Governor observed that NCC cadets in J&K UT led by example during trying times of Covid-19 in activities like awareness campaign and effectively executed the assigned mission during the vaccination program.

The School Education Department & Youth Affairs is wholeheartedly supporting the expansion of NCC coverage in villages and far-flung areas, he added.
The Lt Governor said that our efforts will not only motivate the youth from the villages to join the Armed Forces but will also inculcate the values of Fraternity, Discipline, National Unity and Selfless Service amongst our youth.

Highlighting the significant role of NCC cadets in society, Lt Governor said that they can play a major role in reversing the drug menace in J&K UT, through cadet peer-led intervention.

“As the largest uniformed youth organization in the world, NCC can raise awareness, create a culture of fighting substance abuse and effectively guide the curiosity of young and vulnerable people in colleges and community”, added the Lt Governor. The Lt Governor said the values duty, unity and discipline imbibed by the cadets in NCC inspires them to join the Police and Armed Forces. He further observed that the UT administration has also made provision to give extra credits based on NCC certificate to the aspirants.

This year the Republic Day Parade Contingent of JK&L comprised of 57 cadets selected after tough process of three grueling and arduous Pre-RDC Camps to represent Jammu Kashmir and Ladakh Directorate. 16 cadets were selected for Rajpath Parade, 04 for Guard of Honor and 03 cadets have been awarded DGNCC Commendation Cards this year.

On the occasion, Cadet Anu Choudhary shared her experience and learning gained during the process carried out for the selection of contingent of JK&L for the Republic Day Parade-2022 and Cadet Jarnish Bandral expressed his experience of developing camaraderie and bonhomie over the course of Republic Day camps.

Major General Ranjan Mahajan, Additional Director General NCC Directorate JK&L, highlighted the achievements and activities undertaken by the cadets of the NCC Directorate and selection of NCC cadets in Indian Army, Armed Forces and other Ranks.