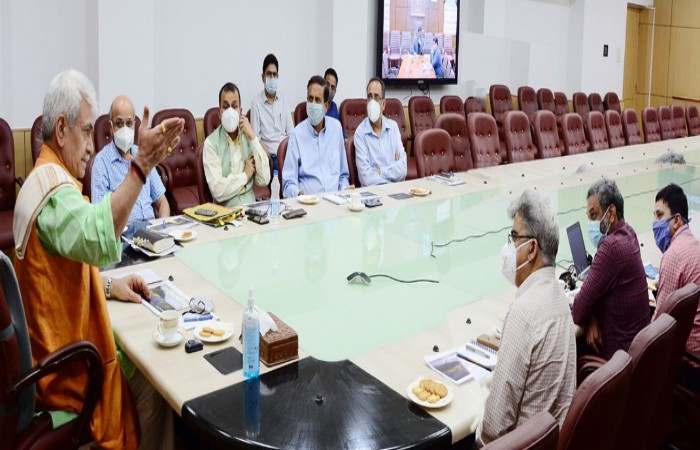 J&K Film Policy to be among the best in the Country: LG
All stakeholders to be taken onboard while finalizing the Policy

Lieutenant Governor, Manoj Sinha today chaired a high level meeting to review the proposed J&K Film Policy-2021, here at Civil Secretariat.
“J&K Film Policy will be among the best in the Country and all the stakeholders would be taken onboard while finalizing it”, observed the Lt Governor.

During the meeting, point wise discussions were held on measures needed to be incorporated to attract and facilitate the film-makers coming to the UT, besides maximizing the potential of promising local film sector and talents for transforming J&K into the most preferred film destination.

The Lt Governor advised the concerned officers to consult the renowned names in the Indian Film Industry to seek and incorporate their suggestions.
He also emphasized on streamlining the Single Window Clearance & Facilitation System, and bringing renowned filmmakers from across the country and abroad for exploring the unexplored scenic locales available in abundance in the UT of Jammu and Kashmir.

Director Information and Public Relations, Sh. Rahul Pandey gave a detailed presentation on Advantages of Jammu and Kashmir for the Indian film Industry, besides Administrative structure and the way forward for the film sector in J&K.