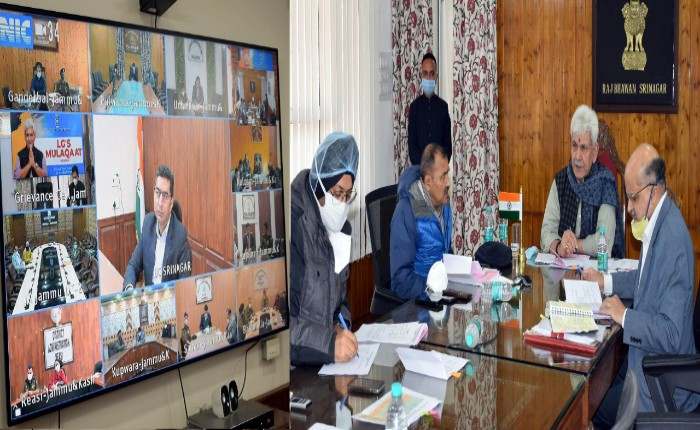 Prompt redressal of people’s grievances and accountable, responsive administration is the hallmark of good governance, which should be followed in letter & spirit, says the LG

Taking cognizance of the applicants’ grievances during the 5th round of “LG’s Mulqaat- Live Public Grievance Hearing”, Lieutenant Governor, Manoj Sinha today directed for with-holding the salary of Director Social Welfare Kashmir for delaying the release of the pending salary of teachers working in a special school.

Expressing his dismay over the matter, the Lt Governor directed for expediting the process of releasing salaries in favour of affected teachers.

On being apprised by an applicant from Kulgam about the issue of raising surcharge in his electricity bills without delivering the same to the consumer, the Lt Governor directed KPDCL for deducting the undue surcharge from the salary of the concerned officials.

In another case, the Lt Governor ordered an enquiry into unnecessary delays made by J&K Grameen Bank in granting the loan to an applicant.

Similarly, the Lt Governor directed for taking action against the responsible official in a matter raised during the interaction, about ARTO Ramban retaining a vehicle’s RC in an unauthorised manner.

During today’s interaction, the Lt Governor interacted with a total of 22 randomly selected applicants from across the UT, through virtual mode, and took first-hand appraisal of their grievances. He also sought public feedback on the administration’s efforts in providing on-spot redressal of their grievances.

The Lt Governor observed that the UT Government is moving forward in its endeavour to strengthen the people-government partnership, where the government is working as a facilitator to the people of J&K.

“Prompt redressal of people’s grievances and accountable, responsive administration is the hallmark of good governance, which should be followed in letter and spirit”, said the Lt Governor.

The Lt Governor sought an immediate response from Administrative Secretaries, DCs, SPs and other senior officers of the various government departments and agencies pertaining to the grievances raised by the applicants.

Timelines were also set for taking requisite action for redressing the grievances projected by the applicants.

The Lt Governor directed the Administrative Secretaries to ensure that all Departmental Websites are updated with the latest information.

During the interaction, the Lt Governor also assessed the implementation of directions passed during the previous interactions.

Earlier, Secretary, Public Grievances, Simrandeep Singh briefed the Lt Governor on the present status of grievances and gave a detailed overview of the overall functioning of the Jammu and Kashmir Integrated Grievance Redress and Monitoring System (JK-IGRAMS).