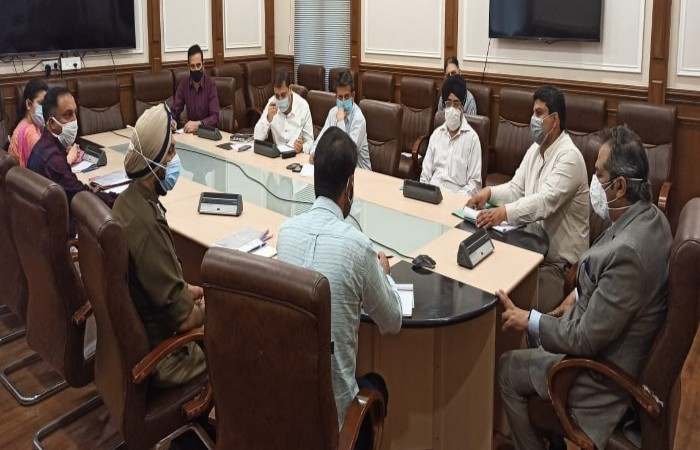 “Patnitop to be developed into a scenic spot”

Advisor to Lieutenant Governor, Baseer Khan today said that Jammu has a huge scope and phenomenal potential for Tourism sector and directed the concerned authorities to take serious efforts to tap that potential.

Advisor Khan made these remarks while chairing a review meeting for the development of Patnitop into a tourist scenic spot at Civil Secretariat here today.

Speaking during the meeting, the Advisor directed the officers to chalk out modalities for overall development of famous tourist hill station, Patnitop.

Advisor Khan said that the area is under main focus of the government and development of the whole circuit is under consideration for promotion of tourism.

The Advisor said that tourism being the backbone of economic development plays an important role in raising the economic standards of people.
Advisor Khan added that Patnitop is one of the famous hill resorts of J&K and there is a need to attract more tourists to this place during all seasons, adding that government is having focused attention on development of Patnitop and other areas as major tourist attractions.

He directed the authorities to identify the prerequisites for developing the place into a scenic spot and come with a Detailed Project Report in this regard. He also asked them to explore the possibility of adventure tourism like trekking, paragliding, river rafting and other sports in the area.

Advisor Khan gave directions to expedite work on sewerage treatment plant for proper disposal of solid waste. He called upon the stakeholders to help the Administration to keep this place neat, clean and polythene free. He asked them to organize joint cleanliness and awareness drives with involvement of other stakeholders and volunteers.

In order to make the tourist spot all weather friendly, the Advisor said that snow clearance should be done on time and said that additional machines will be designated for snow clearance at Patnitop as in the coming time, it will witness a huge footfall of tourists.

Regarding the electricity, the Advisor was informed that the works on underground electric wiring are on final stage.

Regarding various other issues like adequate provision for drinking water, proper collection of garbage, repair and black topping of Patnitop circular road, upgradation of road networks, functioning of public utilities, fire tenders and ATM facilities, medical facility, functioning of sewerage treatment plant etc, the Advisor passed on necessary directions to the concerned authorities for timely disposal of these issues.

It is pertinent to mention here that Advisor had recently taken a tour of Patnitop and taken a detailed feedback from various stakeholders regarding various issues ventilated by them.

Director Tourism, Jammu briefed the Advisor about various developmental initiatives taken for the overall development of tourist destination.
He said that several steps have been taken by the department for promotion and attracting the tourists towards Vaishno Devi Shrine, Patnitop and other tourist destinations.