“May God Do Whatever Is Best For Him”: Pranab Mukherjee’s Daughter Pranab Mukherjee’s condition has “worsened”, the Army Hospital in Delhi said in its bulletin on Tuesday evening. He had tested positive for coronavirus when he went to the hospital Monday for another procedure. Later, he underwent a brain surgery for the removal of a clot.

Former President Pranab Mukherjee’s daughter, Congress leader Sharmistha Mukherjee, has tweeted on her father, whose health remains critical and is in hospital. The 84-year-old “is haemodynamically stable and on ventilator”, the Army Hospital in Delhi said in its bulletin today. He had tested positive for coronavirus when he went to the hospital Monday for another procedure. Later, he underwent a brain surgery for the removal of a clot.

Ms Mukerjee recalled the day her father received the country’s highest civilian award – the Bharat Ratna – last August. She also thanked all those who wished her father a speedy recovery.

“Last year August 8 was one of the happiest day for me as my dad received Bharat Ratna. Exactly a year later, on August 10, he fell critically ill. May God do whatever is best for him and give me strength to accept both joys and sorrows of life with equanimity. I sincerely thank all for their concerns,” Ms Mukerjee wrote on Twitter this morning.

The Bharat Ratna award ceremony at the Rashtrapati Bhawan on August 8 last year was attended by top leaders, including Prime Minister Narendra Modi, who had hailed him as the “outstanding statesman of our times” when the names of the recipients were announced in last January.

“The former President who underwent lifesaving emergency surgery for brain clot on 10 August 2020 has not shown any improvement and his health status has worsened. He remains on ventilatory support,” the hospital said in a statement on Tuesday.

Mr Mukherjee had tweeted on Monday that he had tested positive for COVID-19 and urged people who had come in contact with him in the last week to isolate themselves and get tested for the novel coronavirus.

Soon after the news of his hospitalisation, wishes poured in from various quarters for his early recovery and a number of leaders sent their wishes on Twitter. President Ram Nath Kovind also spoke to Sharmistha Mukherjee and enquired about his health on Monday evening.

Defence Minister Rajnath Singh visited the R&R Hospital on Monday and enquired about the former President’s health. Mr Singh was at the hospital for around 20 minutes. Congress leader Rahul Gandhi also sent in his best wishes to the former president and wished him early recovery. 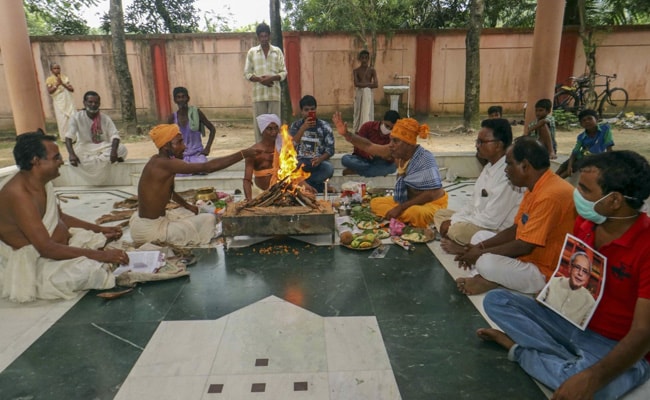 Meanwhile, a 72-hour yajna was organised on Tuesday in Pranab Mukherjee’s ancestral place in West Bengal’s Birbhum district, news agency PTI reported. His sister and other members of the family reportedly prayed for him at their residence in Birbhum’s Kirnahar.