Mehbooba meets Governor, conveys concern over protection of 35-A 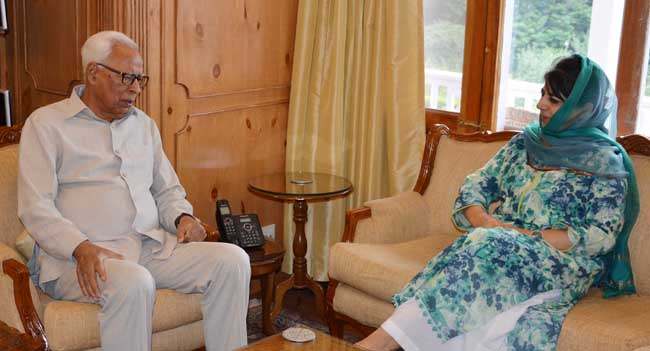 In her maiden meet with the Jammu and Kashmir Governor NN Vohra after she demitted the office on June 19, this year, Peoples Democratic Party President and former Chief Minister Mehbooba Mufti on Friday conveyed her concern over the protection of the state’s special status and pursuance of Rasana case with all seriousness and professionalism.

The PDP President also thanked Governor Vohra for his guidance that he provided to her while running the affairs of the state during the difficult times.  She also stated that her party is hopeful that under Mr. Vohra’s command, things in the state aren’t allowed to go out of control and the situation is approached with care and caution.

The former Chief Minister also requested the Governor that fear, panic, and harassment should be avoided and the rights of the peaceful citizens of the state are protected.

Mehbooba Mufti during her meet also stated that the cases related to the 35-A and Article 370 are sub judice at present and that her government had engaged the top lawyers of the country to defend the state’s special status in country’s top court. She expressed hope that the fight to safeguard Jammu and Kashmir’s special status will carry forward with the same zest.

About the Rasana rape and murder case of an 8-year-old girl, the former chief minister stated that the brutal act against the innocent child was not only condemned worldwide but voices for the severe punishment to the culprits were also raised from all corners.  She maintained that the Crime Branch of Jammu and Kashmir investigated the case well and filed charge sheet without any delay in the court of law. “The case should be followed seriously and professionally so that the culprits are punished as per the law of the land,” said the PDP President.

Mehbooba Mufti also told the Governor that there were apprehensions raised last year about the security to the Gujjars and Bakerwals living in the Jammu region and in that backdrop, her government had ensured that the communities aren’t harassed and the sense of security among them is restored on priority.  She also maintained that these communities have been living in the region for centuries and hence their legal and traditional rights of living there should be protected.