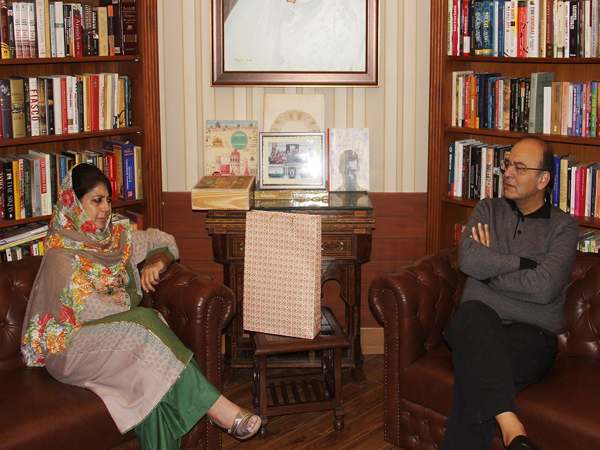 Chief Minister, Mehbooba Mufti, who is on a three day visit to the national capital, called on the Union Finance Minister, Arun Jaitely today and sought restructuring of credit mechanism in the State in view of the recent turmoil and also expeditious release of funds under Prime Minister’s Development Programme (PMDP).

The Chief Minister informed  Jaitley that there was considerable disruption of business activity in the State during the past four months and entire business community, particularly the small and medium businessmen, had to take a hit because of a minimally low trading.

Mehbooba Mufti requested the Union Finance Minister that in view of such exigent circumstances loan repayment and other credit facilities extended to members of business community in the State be restructured so that they can restart their business activities and do not suffer further.

The Chief Minister also sought timely release of funds under various components of Prime Minister’s Development Programme. She hoped that with this programme the socio-economic profile of the entire State is all set to change, giving the people much needed facilities, particularly in infrastructure, for which they have been craving for long.

The Chief Minister also requested the Union Finance Minister for arranging funds for mega projects in the cities of Jammu and Srinagar which cannot be done under routine planning process. She specifically flagged drinking water supply and metro rail projects for the two cities which if taken up under outside collaboration could rid the two cities of traffic congestion and water scarcity for decades to come.

The Union Finance Minister assured the Chief Minister that his Ministry is aware of the difficulties the State has gone through, particularly during last four months. He assured sympathetic consideration on all issues raised by the Chief Minister.

On the occasion,  Jaitley informed Mehbooba Mufti that Central Government would sponsor all such meritorious students who wish to pursue their higher studies within country and abroad.

Financial Commissioner, Planning & Development and Principal Secretary to Chief Minister, B. B. Vyas was also present on the occasion.