Military option on table if talks fail: Rawat on China 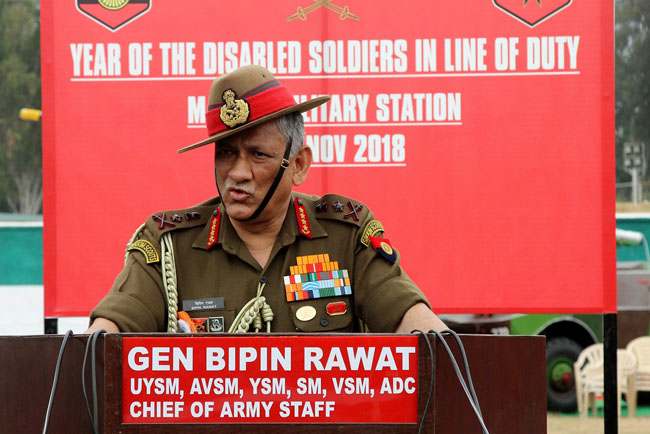 The CDS, who was army chief during the 73-day military standoff in Doklam against the PLA in 2017, also dispelled the notion that there is a lack of coordination among the principal intelligence agencies.

India’s Chief of Defence Staff (CDS) General Bipin Rawat has explicitly stated that a military option to deal with transgressions by the Chinese People’s Liberation Army in Ladakh is on the table, but will be exercised only if talks between the two armies and the diplomatic option are unfruitful.

“Transgressions along the LAC occur due to differing perceptions about its alignment. Defence services are tasked to monitor and carry out surveillance and prevent such transgressions turning into intrusions. Whole of government approach is adopted to peacefully resolve any such activity and prevent intrusions. Defence services always remain prepared for military actions should all efforts to restore status quo along the LAC do not succeed,” General Rawat told Hindustan Times.

“Defence minister Rajnath Singh, National Security Advisor Ajit Doval and all those responsible for national security are reviewing all options with the objective that PLA restores status quo ante in Ladakh,” he said.

The CDS, who was army chief during the 73-day military standoff in Doklam against the PLA in 2017, also dispelled the notion that there is a lack of coordination among the principal intelligence agencies. He said that India has a vast front-line along the northern and western borders along with the Indian Ocean Region, all of which require constant monitoring.

According to him, while India is still working towards acquiring round-the-clock capabilities to monitor its areas of interest, there is regular interaction between all agencies responsible for collection and collation of information. The apex multi-agency centre has been meeting on a daily basis, he pointed out, and constantly keeping everyone informed of the situation on the ground in Ladakh or any other area of interest.

On Saturday, defence minister Rajnath Singh met with the NSA and the three service chiefs to discuss the stand-off along the Line of Actual Control in Ladakh. China has built up its presence along the LAC in Ladakh, with India deploying heavily to match its northern neighbour.

A bloody skirmish between the two sides resulted in the death of 20 Indian soldiers and an unknown number of Chinese casualties on June 15, but while Beijing has repeatedly spoken of peace and tranquility, it continues to maintain its presence in the region.

Takes between the two armies and also a diplomatic dialogue are on to first totally disengage and then de-escalate, but the PLA is seen to be dragging its feet as the issue has a domestic political resonance.Gen Rawat refused to comment on the Saturday meeting and also declined to share any operational details.

On India’s infrastructure development programmes in border areas, the CDS said this has been under way for some years now. “Regular meetings to prioritize and resource these projects are held. They (the projects) have been given the desired impetus over the past three to four years. Our infrastructure development like the construction of Darbuk-Shyok-Daulet Beg Oldi (DSDBO) road or developments in other areas of our northern borders have been undertaken to provide connectivity to our people who are otherwise seeking migration. It also simultaneously assists the security forces who are responsible for monitoring and maintaining surveillance along our border areas. The impetus by the way of prioritisation has helped in development of strategic connectivity for the future,” he said.

It is widely believed that the immediate reason for the Chinese transgressions was the construction of the DSDBO road.

India’s apex China Study Group, which comprises the government’s senior most ministers and officials, has been meeting regularly to review the situation in the Ladakh sector along with the military posture adopted by the PLA. The security agencies are constantly updating information collected through human and technical intelligence about the Chinese Army all along the 3,488-kilometre LAC.

The Indian Army is aware of not only the Chinese military capability in the occupied Aksai Chin area but also in the so-called depth areas through tech-intelligence and satellite imagery. The Indian Air Force has taken note of the Chinese posturing by moving J 20 stealth fighters into the Hotan air base and then moving them away to a different location.