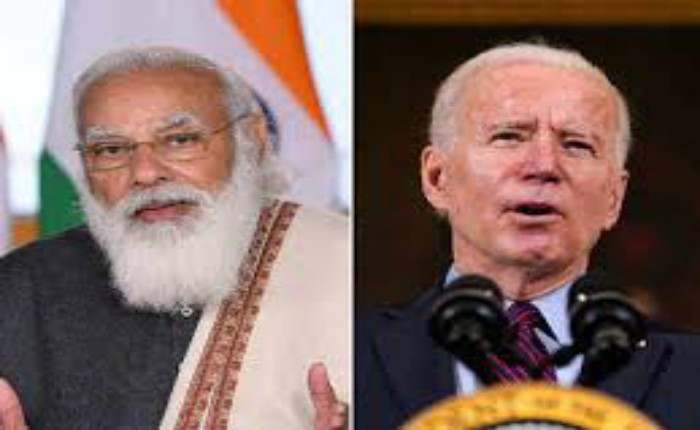 Prime Minister Narendra Modi and US President Joe Biden during a phone conversation on Monday agreed to continue close cooperation to promote a free and open Indo-Pacific region, including support for freedom of navigation, and a stronger regional architecture through the Quad.

During the phone call, Biden underscored his desire to defend democratic institutions around the world and noted that a shared commitment to democratic values is key for the US-India ties.

“The leaders (PM Modi and President Biden) also agreed to continue close cooperation to promote a free and open Indo-Pacific, including support for freedom of navigation, territorial integrity and a stronger regional architecture through the Quad,” the White House said in a press statement.

“The President underscored his desire to defend democratic institutions and norms around the world and noted that a shared commitment to democratic values is the bedrock for the U.S.-India relationship,” the statement added.

This comes as members of the Quad framework- the US, India, Japan and Australia – are working to arrange the first meeting of their leaders amid China’s growing clout in the region.

The move comes as the Biden administration appears eager to build on the renewed attention to the grouping of the four major Indo-Pacific democracies, with national security adviser Jake Sullivan calling it “a foundation upon which to build substantial American policy in the Indo-Pacific”, reported the daily quoting a source.

According to the source, the US has already proposed to other countries the idea of holding an online meeting of the Quad leaders.

During the envisioned meeting, the Quad members are expected to discuss cooperation for the realisation of a “Free and Open Indo-Pacific” amid concerns over China’s maritime assertiveness in the region. It is speculated that China may react with displeasure to the meeting.

The Japan Times reported that for the first time under the Quad framework, the foreign ministers of the four countries met in New York in 2019. The four countries held another meeting last year in Tokyo during the COVID-19 pandemic.

During the October meeting, then-US Secretary of State Mike Pompeo has reprimanded the dragon (China) for using its economic power to increase its hegemony over the neighbouring countries in South Asia.

Pompeo brought to the forum a denunciation of China’s “exploitation, corruption, and coercion” of neighbouring countries. He said, “This is for the soul of the world. This is about whether this will be a world that operates in this sense that we’re on a rules-based international order system or one that’s dominated by a coercive totalitarian regime like the one in China.”

The Quad initiative is expected to put an end to the economic coercion tactics of China and cooperation with Japan and other allies will checkmate Chinese development assistance and its hegemony in the region.