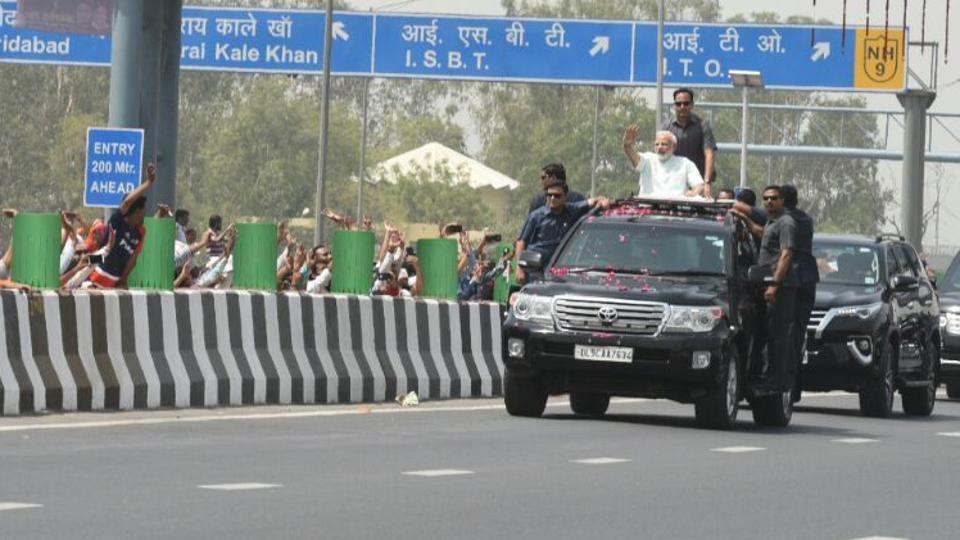 Modi defeated his Samajwadi Party (SP) rival Shalini Yadav by a margin of over 4.80 lakh votes in the Lok Sabha elections from Varanasi.

Prime Minister Narendra Modi on Monday offered his prayers in Varanasi’s Kashi Vishwanath temple on Monday as he visited the temple town, also his parliamentary constituency after getting a landslide victory in the recently concluded Lok Sabha elections.

Banners have been put at various places in the city featuring photographs of Modi.

Another one added, “A lot of development work was done in Varanasi. Now we are just hoping that the same will happen in the next five years as well.”

Three days before taking oath as the Prime Minister for a second consecutive term, Modi will hold a roadshow in Varanasi, and will also address the BJP workers.

The chief priest of Kashi Vishwanath temple, Acharya Ashok Dwivedi said the Varanasi MP has the blessings of Lord Shiva and mother Ganga has accepted him.

Admiring the success of Modi in the Lok Sabha elections, Dwivedi told ANI, “Baba Shiv and Maa Ganga have accepted him. Prime Minister has blessings of Baba with him. Our Prime Minister is the most respected leader.”

“This is our fortune that Prime Minister will perform puja with all rituals like he did in 2014 Lok Sabha and state elections. He is the biggest devotee of Vishwanath baba. Even before the rituals start, he devotes himself to god, you can see tears of devotion in his eyes”, he added.

Modi is also expected to hold a five-kilometre-long roadshow in the constituency to celebrate his massive victory in the Lok Sabha elections.

After the ‘darshan’ and ‘puja’ at Kashi Vishwanath temple, the Prime Minister is scheduled to address the BJP workers at Deendayal Hastkala Sankul.

Modi defeated his Samajwadi Party (SP) rival Shalini Yadav by a margin of over 4.80 lakh votes in the Lok Sabha elections from Varanasi.