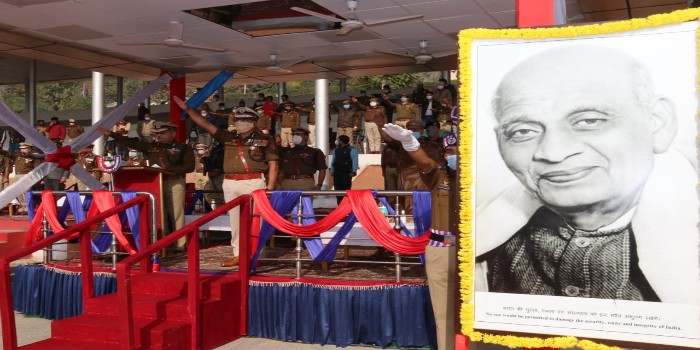 Every individual has to contribute for unity and integrity of the country: DGP J&K

Jammu and Kashmir Police on Saturday celebrated National Unity Day (Rashtriya Ekta Diwas) across Jammu and Kashmir. The main function was held at Armed Police Complex Zewan where DGP J&K, Dilbag Singh who was the Cheif Guest on the occasion took the salute of parade.

The ADGP Armed, J&K Shri A. K. Choudhary administered oath to the police officers and Jawans of Police,CAPF,Forest Protection Force,Fire and Emergency Services.

Contingents from Police, Fire and Emergency Services, Forest Protection Force and contingents of CAPFs, took part in the colourful march past.

Speaking to the media on the sidelines of the function DGP,J&K Sh Dilbag Singh said that the National Unity Day function along with other similar functions across the country have been organised to pay tributes to the Iron Man of India ‘Sardar Vallabhbhai Patel’, the first Home Minister of the country for his contribution in the independence movement of India and integrating more than 550 princely States into one union.

The DGP said that to commemorate huge contributions of Sardar Vallabhbhai Patel, Rashtriya Ekta Diwas is celebrated wherein we take the pledge for internal security, integrity and sovereignty of the country. He said that this day is not only for men in uniform to celebrate but every single individual has to remember his contribution and in one way or other has to contribute for unity and integrity of the country.

With reference to the Kulgam terror crime, the DGP said that terrorists involved in the terror crime have been identified and further investigation into the crime is on. He once again appealed the misguided youth to shun the path of violance, distruction and return back to the mainstream, promising every possible support and added that it is very encouraging that in the recent past local youth who had joined terror ranks accepted the offer of forces and surrendered at encounter sites. The DGP said the Jammu and Kashmir Police force has been on forefront in providing its support to the youth, participating in positive activities and under this initiative a number of sports events have been organized across J&K.

Meanwhile, the day was celebrated at all district, unit and wing headquarters across Jammu and Kashmir during which the concerned Police heads administered oath to the police officers and Jawans. Police officials were encouraged to work hard with honesty and dedication in the interest of unity and integrity of the Indian Nation.