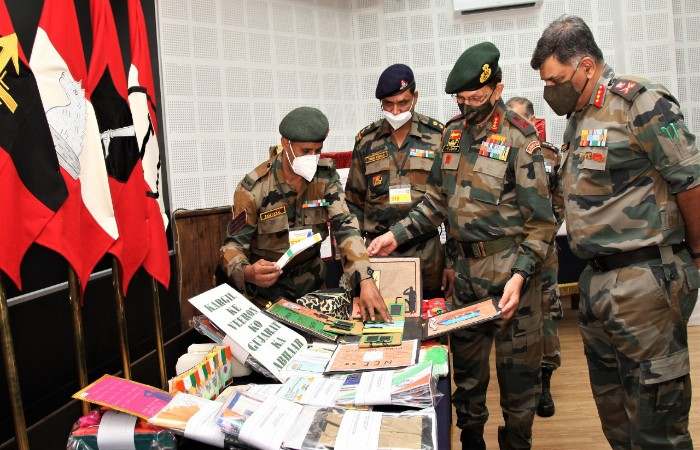 In a brief ceremony held at Headquarters Northern Command, Lieutenant General YK Joshi, UYSM, AVSM, VrC, SM, ADC, General Officer Commanding in Chief, Northern Command received 29,566 cards made by NCC cadets of Gujarat with the spirit of patriotism to inspire the soldiers deployed along the Line of Control, Line of Actual Control and the hinterland in the UTs of J&K and Ladakh. The cards arrived at Udhampur in the early hours of 20 Jul 2021, escorted by NCC personnel from Gujarat and were presented to the Northern Army Commander. While speaking at the cards presentation ceremony, Lieutenant General YK Joshi, UYSM, AVSM, VrC, SM, ADC commended the spirit of patriotism exhibited by the people of  Gujarat in general and the NCC Cadets in particular through a novel and  innovative way of telling the soldiers on the line of duty that the nation supports them with heart and soul. The Army Commander Northern Command quoted GK Chesterton, a British writer, philosopher and theologian who had once said, “The true   soldier fights not because he hates what is in front of him, but because he loves what is behind him.” The Army Commander also said “No soldier marches into battle merely to destroy for the sake of destroying. He marches not because he is trying to break free from something, but because he is bound to something. This gesture by the NCC Directorate, Gujarat will assure each soldier on the front line that the hard ship he bears and the sacrifices he and his family make on a daily basis are not going unrecognized and the citizens of   India particularly the youth, are grateful to him for the efforts”.

On 17 Jul 2021, the Hon’ble Chief Minister of Gujarat, Shri Vijay Rupani had flagged off the consignment of 29,566 cards which were made by NCC Cadets from NCC Directorate, Gujarat, ably led by Maj Gen Arvind Kapoor, the Additional Director General.  The cards were dedicated to the memory of Kargil Martyrs. The Northern Army Commander thanked Maj General Arvind Kapoor for conceptualization and launch of the campaign in support of Kargil War Heroes. The Chief Minister on 03 July 2021 had pushed forward a campaign “Kargil Ke Veeron Ko Gujarat Ka Aabhaar” as symbol of gratitude to the Kargil Heroes and the soldiers currently deployed at Kargil and our national borders. The effort of the cadets was recognised by the World Book of  Records, London and have been awarded a certificate of  commitment. The cards are a step towards the immortalization of the soldierly spirit with which the warriors fought on the rocky heights at the Line of Control during Operation VIJAY.

The Northern Army Commander thanked Shri Vijay Rupani, the Hon’ble Chief Minister of Gujarat for his words in the honour  of Kargil war heroes at the ceremony to Flag Off  the cards on 17 Jul 2021 and said that such gestures by the leaders go a long way in infusing the sense of pride among soldiers and their families.

Lt. Gen. Anil Chauhan to take over as CDS today