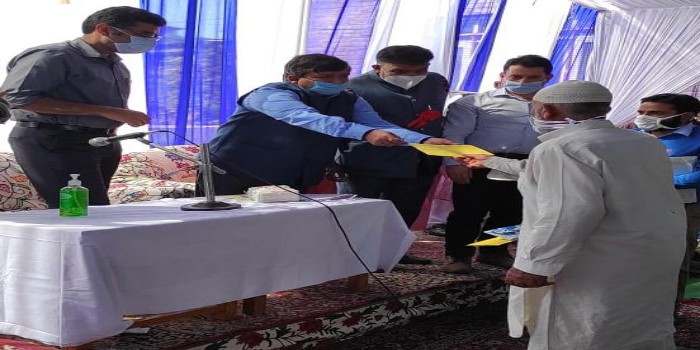 Srinagar again witnessed a considerable public participation during the third Block Diwas programme held as part of the three-week Jan Abhiyan programme being held in Kashmir districts ahead of the Back to Village 3 or B2V3 programme.
The programme which is a special public outreach initiative was held at block and sub-divisional headquarters of all four rural blocks of Srinagar.
In each block all concerned government departments held special camps aimed at reaching out to the residents in efforts to redress their grievances and register those eligible under government sponsored welfare schemes on the spot.
Nearly 800 eligible beneficiaries in aggregate were enrolled or registered under different government schemes at these camps on the occasion of the outreach programme.
These include 129 families covered under the Ayushman Bharat scheme, 155 persons under the National Social Assistance Programme, 141 under the Integrated Social Security Scheme and 344 students who were covered under relevant educational scholarship schemes.
Senior officers of the administration chaired these camps held at Panzinara (Qamarwari block), Lasjan (Srinagar block), Harwan and Khonmoh.
Principal Secretary Housing and Urban Development Department Dheeraj Gupta visited the camp held at Panzinara. Deputy Commissioner Srinagar Dr Shahid Choudhary accompanied him.
In other blocks the Block Diwas programme were chaired by Additional Deputy Commissioner Srinagar M Haneef Balkhi in Lasjan, Assistant Commissioner Revenue Srinagar in Khanmoh and Sub Divisional Magistrate Srinagar in Harwan. Senior officers along with their teams from concerned departments were present at all camps.
Hosts of other activities also marked the special public outreach programme held in the district.
During the programme over 1000 different kinds of documents and certificates were issued to residents on the spot.
The documents and certificates issued on the occasion include 633 domicile certificates, 465 category certificates, and 214 revenue papers.
Other similar services were made available to people on the occasion of the programme. In addition to over two dozen specially abled persons who were issued disability certificates on the spot, some 330 eligible beneficiaries were issued Kisan Credit Cards.
Aadhaar-based services were also available at these camps where nearly 400 ration cards of residents were seeded with their Aadhaar cards.
Redressal of public grievances on the spot was another major part of the outreach programme. Of over 200 received over 80 grievances were redressed on the spot. The remaining grievances were noted for forwarding to concerned quarters for earliest possible redressal.