No one has restrained state from recommending CBI probe: Choudhary Lal Singh 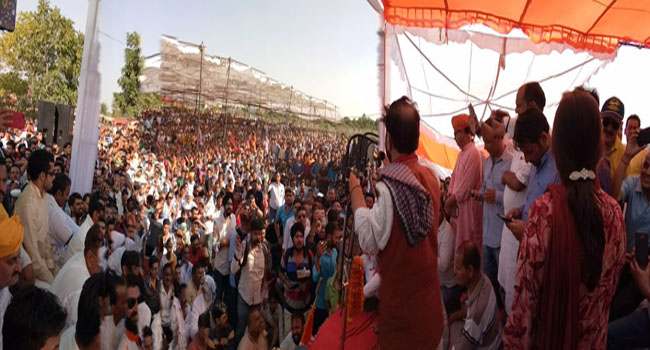 People are keeping a close watch on what is happening in the court and hence, no one should be under any illusion that they can befool people in this 21st century

The sea of people which converged today to pay homage to the 8 year old Goddess and seek CBI inquiry into her alleged rape and murder is enough to ring alarm bells in the air conditioned rooms of those who are in power. They need to understand the message, show courage and seek CBI probe.

“Scorching heat failed to break the resolve of people of Jammu region. They walked with me right from Lakhanpur to Londi Morh, Hiranagar. A distance of 36 kilometers was covered in 9 hours. Not even one returned home. Young and old, male and female, all walked for 9 long hours to convey a message to those in power that you cannot continue discrimination with Jammu region. You cannot take us for granted. You have to listen to us.”

“If they will still remain silent, people are not going to forgive them. We are being told that the case is being monitored by Supreme Court (SC) and hence, a probe cannot be ordered. We must tell those who are in power that they should stop befooling people. The Honourable Court has not restrained the state government from recommending a CBI probe in this case. People are keeping a close watch on what is happening in the court and hence, no one should be under any illusion that they can befool people in this 21stcentury,” said Ex-Forest MInister Choudhary Lal Singh in a statement issued here today after addressing the Dogra Swabhiman Rally.

“Those who are trying to connect this Dogra Swabhiman Rally with several other issues should take a look at my political career. I have always stood for my people. I resigned and immediately start mass contact programme to find out what my people were saying. They had no demand but they only wanted me to take up the cause of getting Justice for the 8 year old Goddess who has united entire Jammu region. They tried to divide us along religious, caste and colour lines but we have failed all their efforts today by taking out a peaceful rally and converging at a place closer to the home of that 8 year old Goddess. We reiterate demand for CBI probe,” said Choudhary Lal Singh.

“Those who would often say that Jammu is leaderless should today stop making these absurd statements. Sea of people that had gathered for Dogra Swabhiman Rally have sent a clear message that they only want CBI probe and nothing else. We respect Supreme Court of India more than those who pelt stones on the same police officers behind whom they are standing right now but we are pleading with our state government to recommend CBI probe,” Choudhary Lal Singh.

What stops the state government? I can understand that this case for them is purely a prestige issue and an attempt to pacify their vote bank which is agitated and angry with them. I can see that they are trying to sell this Crime Branch inquiry to the people of Kashmir valley as major victory over Dogras of Jammu region. They are trying to convince their electorate that the leadership of Jammu region is subservient to them. They are great at selling things to their electorate which are either Pakistani or communal in the making, said Choudhary Lal Singh.

They would not have hesitated in ordering CBI probe had the situation in Kashmir been in their favour. This has resulted in them taking an immoral stand on the demand of Jammuites for CBI probe in the Rasana case. They call themselves public leaders and hold small public interactions in government guest houses in Kashmir yet they come to Jammu and say that Jammu is leaderless. This rally has settled this question of leadership of Jammu region for all times to come. The political class of Jammu region should introspect over the repercussions of not getting CBI probe recommended by the state government,” said Choudhary Lal Singh.

People of Jammu region who voted for empowerment and progress are today feeling let-down by us all. We owe an explanation to them. They won’t spare us all. I fear we may be face social boycott if we continue being voice of Kashmir in Jammu. We cannot continue being sacrificial lambs. We too have aspirations and they are highly secular in nature. Hindus, Muslims, Sikhs living in Jammu region are all Dogras and they all want Justice for this 8 year old Goddess. We will not rest till Justice is not done and those responsible for this gruesome act are not hanged, said Choudhary Lal Singh.

I need no certificate of secularism from those who have got expertise in dividing people along caste, colour and religious lines, said Choudhary Lal Singh. He thanked people of Jammu region for their unwavering support in getting justice for the 8 year old Jammu girl. “I am thankful to all of you for having taken out time out of you busy schedules to attend this Dogra Swabhiman Rally. Half the battle has been won. If we stay united, success would be ours. Next course of action would be shared with the people in the days to come,” Choudhary Lal Singh said.