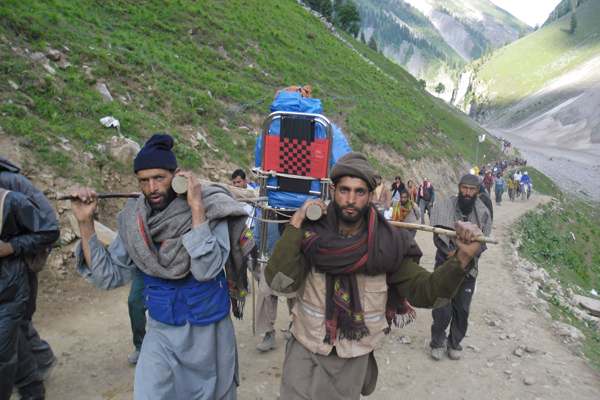 A study reveals that the economy  of the nomadic tribal—Gujjars Bakerwal in Jammu and Kashmir is falling, which is forcing them to change their occupation from cattle raring  to unskilled labour.

In view of this, the nomad have demanded immediate extension of  newly launched centrally  sponsored  scheme  ‘Tribal livelihood programme’  to Jammu and Kashmir-the Gujjars -a main scheduled tribe  community.

The demand was raised in a programme organised by ‘Tribal Research and Cultural Foundation’ here today aimed to discuss the issue related to tribal economy. Noted tribal researcher Dr. Javaid Rahi  presided over the event while tribal dignitaries participated in the programme.

Dr. Javaid Rahi in his address stated that if ‘Tribal livelihood programme’   extended to Jammu and Kashmir it will not only helped to boost the tribal economy of nomads but it can also bridge gaps in schemes and to promote entrepreneurship among tribal communities.

He said that a detailed memorandum on behalf of Gujjars of J&K was sent to Prime Minister of India Narendra Modi   urging him to intervene and include J&K states in the list like Assam, Gujarat, Madhya Pradesh, Rajasthan, Odisha and Telengana which were chosen by the  Centre under tribal ministry  to National Resource Centre for Tribal Livelihood, ‘Vanjeevan ‘ programme  launched.

He said if J&K will get included in the list of states where this scheme was launched in 1st phase  – it can cater to development and promotion of livelihood avenues in areas like farm, non-farm, forest-based allied sectors through entrepreneurship and skill development.