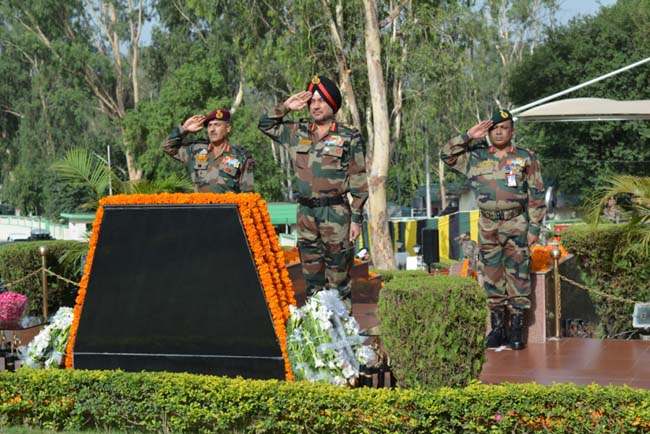 The 47th Raising Day of Northern Command, was celebrated with pride and patriotic fervour at Udhampur.

Lt Gen Ranbir Singh, GOC-in-C Northern Command, paid homage to the brave martyrs who made the supreme sacrifice for the security and safety of the Nation and laid a wreath at the Dhruva Shahid Samarak.

The Northern Command was raised on 17 Jun 1972. Battle hardened and extremely rich in combat experience the command has a glorious history covering the entire spectrum of warfare. Drawing inspiration from the saga of bravery and sacrifices of their predecessors, the troops continue to serve with utmost zeal and enthusiasm while being deployed in extremely inhospitable terrain and hazardous weather condition which includes the highest battle field ‘ The Siachen Glacier’. The Northern Command has time and again provided succor to the civilian population, be it during natural calamities or participating in Nation building activities as part of Sadhbhavana activities for the ‘Awam’.

On the occasion, the Army Commander exhorted all ranks to continue to perform their task with fortitude, dedication and professionalism and be prepared for all future challenges.

The Army Commander extended his good wishes to the families and Defence civilian staff of the Command and complimented the troops for their steadfastness, resolve and exemplary devotion to duty.