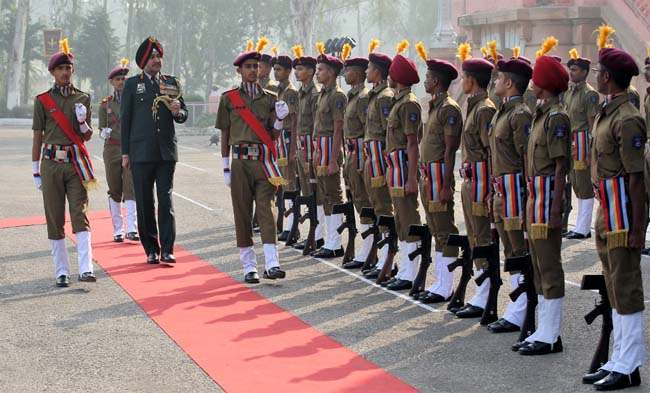 Lieutenant General Ranbir Singh, General Officer Commanding-in-Chief Northern Command visited Sainik School, Kapurthala on 8th December 2018. The Army Commander, an alumni of the school, was received by Brig D Palsokar, Station Commander and the Principal, Colonel Vikas Mohan. He was thereafter, given a guard of honour by a contingent led by the School Captain. He also placed a wreath at the School War Memorial. Lieutenant General Ranbir Singh is the first student from the school to have risen to become an Army Commander in the Indian Army. He interacted with Principal, Staff, Cadets and Alumni of the school and thanked the establishment for inviting him to his alma-mater. While addressing the cadets, he urged them to strive for excellence and advised them to put in their sincere and persistent efforts in realising their potential in scholastic and non-scholastic pursuits. The Army Commander exhorted them to be worthy of the high traditions and ethos of the school. He said, “ You have a responsibility to carry along an honourous tradition of dedication and excellence built over the years by cadets who have passed out before you.” While motivating them to join the Armed Forces, he expressed his confidence, that the cadets would prove worthy of their expectations and wished them continued success in all their endeavours. The Army Commander also congratulated the faculty for their services, keen involvement in imparting high standard of training and winning the Defence Minister’s Trophy for sending the highest number of cadets to the National Defence Academy for a record seventh time.

Later, during the day, the Army Commander also attended the Old Boys’ Association Meet. The Army Commander urged the old boys to contribute towards further growth of the school and assist to train the cadets for SSB interviews and appreciated the efforts made by the fraternity, in an organised manner in upkeep and maintenance of cadets’ hostel. He further congratulated the school for having the maximum number of serving teachers who have been recipients of prestigious President’s Teachers Award. The school showered accolades on the General for his outstanding contribution to the organisation .