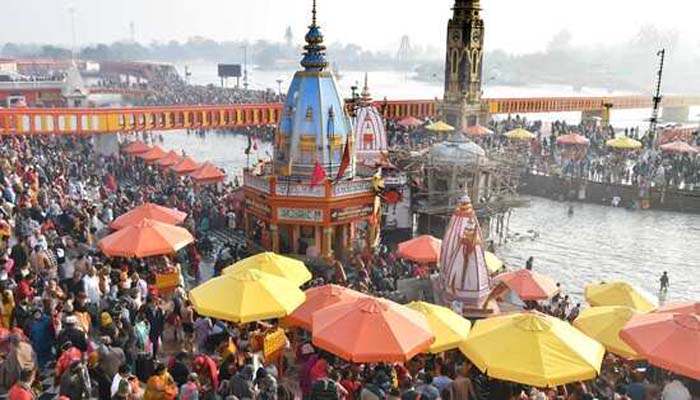 A day after the Union health secretary wrote to the state chief secretary raising concerns over “inadequate” preparations to handle Covid-19 spread in Haridwar Mahakumbh amid the rising number of Covid-19 cases across the country, the Haridwar district administration and mela authorities have stepped up the preparations for the same. The administration continues to face challenges given the pilgrim numbers that will turn up during the world’s largest religious congregation.

The health department has decided to increase the number of tests during Mahakumbh mela which is scheduled to start from April 1 and go on till April 30. A government order on the same is yet to come. It has also decided to especially focus on the devotees coming from states, including Maharashtra, Tamil Nadu, Punjab, Madhya Pradesh, Delhi, Gujarat, Karnataka, Haryana and Uttar Pradesh, where the cases have significantly increased in the past few days. Many experts are terming it the “second wave” of Covid-19 spread.

Chief medical officer, Haridwar, Dr SK Jha said that following the Centre’s instructions to ramp up Covid-19 precautions, the district health department has decided to increase the number of tests in the mela area by roping in private pathology companies also.

“To ensure maximum random testing of pilgrims during the peak of Mahakumbh, especially during the Shahi Snans, we would increase the tests by about four times. We have also tied up with seven private pathology companies to conduct the Covid-19 tests,” said Dr Jha.

He said that the administration has built a 1,500-bed Covid-19 facility for the purpose of isolating those devotees who test positive for the virus.

“Apart from this, six temporary hospitals are also being built in the entire Mahakumbh area. Also, ashrams and medical colleges in Haridwar would also be utilised to ensure adequate beds for Covid-19 isolation during the fair which is expected to witness millions of devotees, especially during the Shahi Snans,” said Dr Jha.

Chief minister Tirath Singh Rawat had earlier eased out the Covid-19 restrictions in the Mahakumbh, including ending the mandatory Covid-19 RT-PCR negative test report, saying that, “the mega-event is held after every 12 years, hence devotees cannot be stopped from coming.” He had also promised to run extra buses to ferry devotees from neighbouring states to Haridwar apart from requesting railways to run extra trains during Shahi Snans during the Mahakumbh.

His move was questioned by many experts apart from previous CM Trivendra Singh Rawat who had said that “lifting of restrictions would be highly risky for the state considering the rising number of cases in the country.” Later, on Saturday, during his visit to Haridwar, the chief minister had said that “the faith of devotees will overcome the fear of Covid-19” after which he tested positive for the virus on Monday.

As part of precaution, the authorities would also conduct random sampling of people coming from public transport and private vehicles.

“If any person is tested positive for the virus in public transport then he would be isolated in the Covid care centres as per the norms. However, if any person coming by his private vehicle tests positive, he would be turned back,” said Mahakumbh nodal health officer Dr AS Sengar. The official said that apart from trained doctors and nurses, medical students would also be deployed in the health facilities during Mahakumbh.

He also stressed the strict adherence to Covid-19 precautions by those attending the mega-event.

“To ensure compliance with the Centre’s guidelines, mela administration has started making relevant arrangements. Masks will be mandatory for all pilgrims which will be provided to them free of cost. Installing sanitiser dispensers, regular sanitization of Ganga ghats and water tap-soap facility for washing of hands is also being ensured by the mela administration,” he said.

He also informed that during the first Shahi Snaan of Mahakumbh on March 11, around twenty teams of health department were formed for random checking of RT-PCR negative reports of pilgrims and tourists staying in hotels, lodges, ashrams, dharamshalas and guest houses.

Amid the recent spike in Covid-19 positive cases, the administration on Monday held a meeting with dharamshala, hotels, tour-travel association, and traders to take adequate preventive measures regarding Covid-19.

“From now onwards, the authorities would be checking hotels, lodges and dharamshalasas daily to ensure that they are adhering to the Covid guidelines,” said additional mela officer Ramji Sharan Sharma.

Apart from the health administration, the police have also geared up to implement the Covid-19 precautions during Mahakumbh.

Circle officer Kumbh traffic, Prakash Deoli, said, “Owing to a large number of pilgrims coming from buses and private vehicles, we have already enhanced the infrastructure at border check posts along with a ready to implement route diversion plan in case of pilgrim influx increasing during Mahakumbh.”

He added, “The entry points to Haridwar from Narsain, Mandavar, Kali Nadi, Chidiyapur, Chila canal and Raiwala will be manned by state police and paramilitary forces personnel to ensure that the Covid-19 guidelines are followed by all.”

The experts are, however, sceptical with the administration’s claims regarding the Covid-19 precautions, especially on the number of tests being done by it on a daily basis in Haridwar.

Social activist Anoop Nautiyal, who had been keeping an eye on the pandemic situation in the state since the lockdown, said, “As far as the letter by the Union health secretary to state chief secretary is concerned, it suggests that the state has informed him that the government is conducting about 55,000 Covid-19 tests daily, something that is hard to believe.”

“As per the daily health bulletin issued by the state health department, from March 1-21, a total of about 1 lakh tests have been conducted with about 5,000 tests every day, which is much less than what is claimed by the state before the Centre. With the number of cases rising again, the state should ensure foolproof facilities to handle the spread else it could prove very deadly for us considering the limited resources we have,” said Nautiyal.