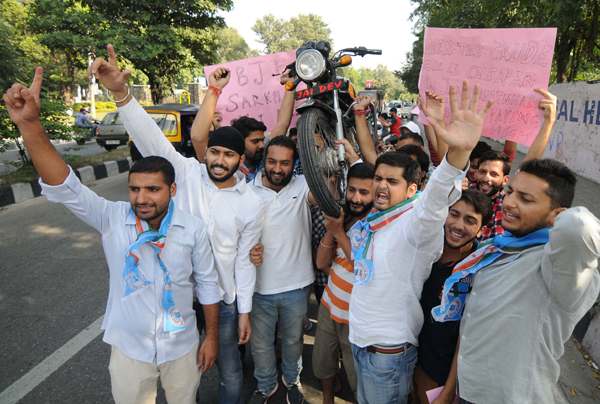 Jammu, Oct.16
National Students’ Union of India (NSUI) today protested against Petrol price hike by Rs 1.34 a litre on Saturday and and diesel by Rs 2.37 a litre — “fifth hike increase in two months”.

Highlighting the promises made by PM Narendra Modi during the Lok Sabha election campaign, NSUI State President Neeraj Kundan accused the government of being insensitive towards the Aam Aadmi and for taking U-turn on his promise of ‘Acche Din’.

Neeraj Kundan, Jammu and Kashmir NSUI President said, “The Prime Minister should apologize for the false promises he made. This price hike has come at a time when the farmers in the country are facing an acute agrarian crisis without much compensation from the government; this step would only increase the burden on them”.

“It is high time our Prime Minister should start thinking about the citizens and not focus on a selected few industrialists”, he added.

Fairoz Khan National secretary NSUI , Quoting a tweet by the then Chief Minister of Gujarat, Modi in 2012, which read “Massive hike in petrol prices is a prime example of the failure of Congress-led UPA”,

Now where is that modi and where are Ache Din , he added that the price of petrol was last hiked by 14 paise per litre and that of diesel by 10 paise a litre on October 5, Prior to that petrol price had been hiked on three occasions. Despite of lower prices of crude oil in international market, the NDA government is unable to check on fuel prices.