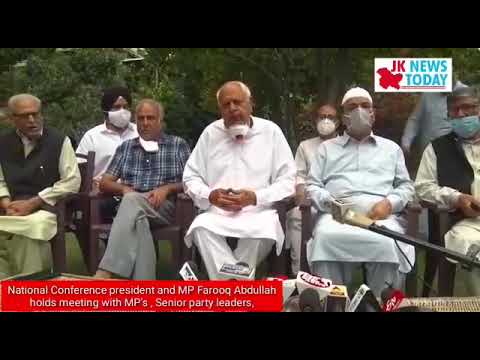 Omar, Sagar, Kamaal, others participated in the meet

A meeting of the Political Affairs Committee (PAC) was held today at the National Conference headquarters Nawa-e-Subha, Srinagar. The meet was presided over by Party President and Member of Parliament from Srinagar Dr Farooq Abdullah.

“The unilateral, undemocratic and unconstitutional measures undertaken by GOI, and its impact on the ground level in Jammu and Kashmir was deliberated in the PAC meeting. On the occasion, the PAC members authorized the party President to widen the acceptance of Gupkar Declaration among all the sections in Kashmir, Jammu and Ladakh. The participants applauded the efforts of party presidents for his efforts underway to bring different political voices on a single platform for the restoration of J&K’s honor, which was undemocratically, unilaterally and unethically rescinded on the 5th of August last year. Besides that the members of PAC also took strong exception of the succeeding measures undertaken by New Delhi following the annihilation of Articles 370, 35-A,” reads the party statement.

PAC members also expressed outrage over the decision undertaken on 5th of August last year, saying the measures have violated the spirit of federalism and the sovereign pledges of Union of India to the people of Jammu and Kashmir made from time to time . The members appreciated the peace loving people of J&K for their peaceful response to unwholesome decisions undertaken by GOI. The PAC members vowed to stand behind the party president in his efforts to bring all political parties and other civil society groups on one platform to pitch for the restoration of what was unconstitutionally snatched from the people of Jammu and Kashmir.

Party president took stock of party activities in different districts, including Kargil, Chenab, and Pir Panchal regions. The PAC members also rued the widespread administrative inertia, and development deficit in J&K and expressed concern over the state of economy in J&K. They also expressed dismay over the plight of people associated with agriculture, horticulture, tourism, large and small businesses, medium and small scale industries and handicraft sector.