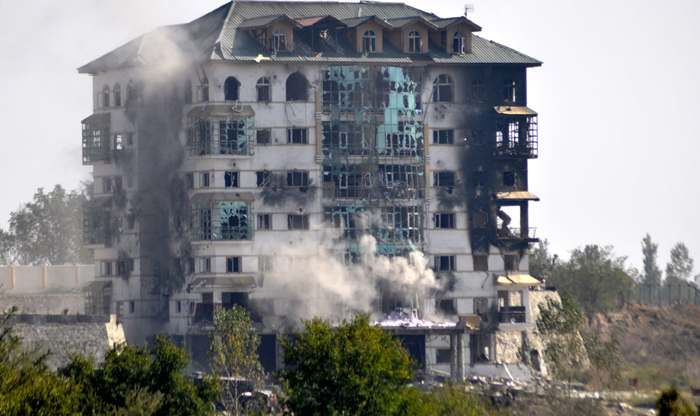 Srinagar,  October 12: The army’s  patience had started paying off in more than 50-hour gun fight  with  two out of the three terrorists holed up in a seven storey building at Pampore, south of the capital of Srinagar,  were killed on Wednesday.

One of the terrorists had died late  last  night, while the second was killed on Wednesday  morning . The hunt is on for the third terrorist  and the soldiers were moving from room to room to  find him out.

The army  relied on the power of explosives, rockets to  neutralize the terrorists who had entered the building from Jhelum river side by  reaching the bank by rowing a boat, according to sources . This time, it kept its instincts of dare devil response on patience mode .

In February this year, while trying to flush out the terrorists from the same building, the army had lost two of its para commandos.

The searches are on . “ It is a matter of time when the  third and the last  terrorist  would be neutralized,” a police officer monitoring the operation  told the JKNT