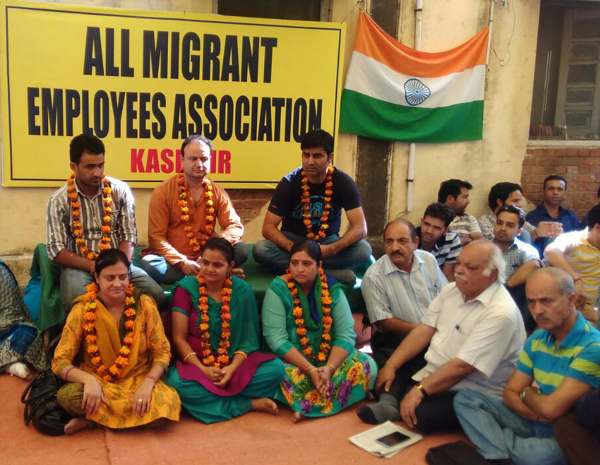 In protest against the indifferent attitude of the PDP-BJP coalition government against the Pandit youth recruited under Prime Minister employment package, who are on strike in Jammu, employees today started chain hunger strike.

All Migrant Employees Association of Kashmir (AMEAK) are seeking fool-proof security arrangements for them in Kashmir and release of salaries on time. They are also seeking adjustment outside Valley.

“The 102 day old strike of the migrant employees has now been intensified after the BJP-PDP government showed no concern regarding the resolution of their problems with the beginning of symbolic chain hunger strike which would ultimately be converted into fast-unto-death if the government continues to harass employees” alleged Vinod Pandit, chairman All Parties Migrants Coordination Committee (APMCC).

Speaking on the occasion national spokesperson APMCC King C Bharati said that APMCC has decided to come out in full support of the AMEAK and warned the BJP-PDP government of dire consequences if it continues its discriminatory attitude towards Pandit community.

He also warned the state government that harassing tactics with Pandit employees must stop immediately otherwise it should get ready to face some drastic steps which include gherao of ministers, bureaucrats and politicians in near future.

The volunteers who sat on the first day of chain hunger strike include Vinod Tikoo, Sunny Raina, Ranjan Jyotishi, Sarita, Sureeta and Suneeta.

The NC minority Cell president MK Yogi while extending his full support ridiculed the government for harassing KP employees after facing heat in Kashmir while Dr TK Bhat of ASKPC said that community leadership will take the case to broader level to expose the misdeeds of the government.