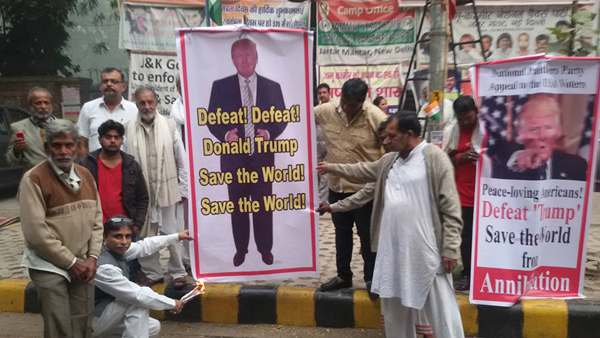 Several Panthers Party activists held a massive protest  in front of the Indian Parliament in Delhi making a strong, emotional and scientific appeal to the American voters to join hands to defeat the “fascist thinker American candidate Donald Trump”.

This they said should be done to ensure that the world remains safe and secured even after the Presidential election in the USA at the end of this year.

Prof.Bhim Singh, the Founder & the Chief Patron of J&K National Panthers Party made a strong appeal to the American voters to exercise their vote power in the interest of international peace and security which is under threat today because of existing international disputes and conflicts.

He said that American President has to be a person like Ibrahim Lincoln, Kennedy or other heads who have cool mind and acceptability of the peace-loving people all over the world. Singh said that the Republican candidate, Donald Trump has sought a wave of threat to the peace of the world even to the existence of the entire world by his expression and actions as a Presidential candidate in the United States of America.

The activists of Panthers Party to mark their protest against Donald Trump set his 6-feet tall effigy on fire just to ensure that the “protest from New Delhi, India is noticed by the democracy loving great people of the United States of America.”