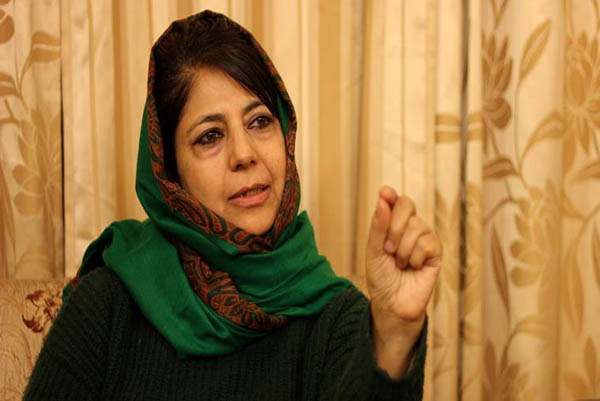 “Srinagar-Anantnag road converted into a highway of horror and humiliation”

Asking New Delhi not to shy away from engaging with the people of Jammu and Kashmir, Peoples Democratic Party (PDP) President and former Chief Minister Mehbooba Mufti exhorted the Government of India to take a considerate view of their rights and aspirations.

Addressing a mammoth gathering of senior party workers during a daylong convention of District Anantnag, Mehbooba Mufti reiterated that road to peace in the subcontinent traverses through Kashmir, dialogue and reconciliation being the only meaningful mechanism to resolve the impending issues and catapult the region out of vortex of misery and uncertainty.

“Many people are ill at ease when I advocate the restoration of our constitutional rights and speak for the resumption of the dialogue process. But since when has articulating legitimate demands of our people and seeking resolution for peace become a crime? If not the Government of India, who else do the people of Jammu and Kashmir turn to,” Mehbooba asked.

Underlining the changing geopolitical scenario, Mehbooba expressed hope that GOI will seize the opportunity awarded by the impending SAARC summit that is likely to provide a window of opportunity to pick up the threads of dialogue and peace process between India and Pakistan.

“Geopolitically a lot has happened over the last couple of months. The country is meaningfully engaging with China and steps have been taken to strengthen the ceasefire mechanism with Pakistan. The SAARC summit could soon convene in Pakistan and I hope that the Prime Minister participates in it. It could be the opportunity to revitalize the ties and jumpstart the peace process through dialogue. That is what people of Jammu and Kashmir are yearning for,” Mehbooba Mufti said.

Thanking the people of District Anantnag for nurturing the idea and identity of Peoples Democratic Party, Mehbooba assured them that she would be at the forefront of their struggles.

“The people of Anantnag have played a vital role in founding the movement called PDP. You have been my constant companions through thick and thin and I assure you that you will always find me by your side in happiness and grief,” Mehbooba added.

Talking about the problems beseeching the people of South Kashmir she said that it pains her to see that Srinagar-Anantnag road has been converted into a highway of horror and humiliation. She urged the authorities to put an end to curbs and humiliation that people are enduring while travelling along the road.

Addressing the convention, the Party Vice President A R Veeri highlighted the role and contribution of PDP under the leadership of Mufti Mohammed Sayeed and Mehbooba Mufti towards ushering in an era of development in the district.

“From establishing Medical College, AIIMS & Tourism Development Authorities, revamping road infrastructure to augmenting educational and healthcare infrastructure, the efforts of PDP as a representative political party is there for everyone to see,” he said.