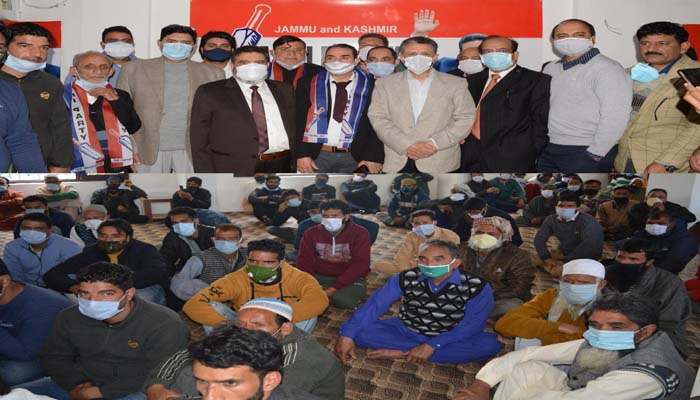 Apni Party President Syed Mohammad Altaf Bukhari on Monday said the frequent curtailment in electric and water supplies, besides the unprecedented price rise of essentials is presently giving a tough time to the people in Jammu and Kashmir.

Addressing a joining ceremony held at the party office in Lal Chowk, Srinagar in which various prominent political activists from Devsar-Kulgam joined the party, Bukhari asked the administration to live up to its promises made before the onset of the holy month of Ramadan.

“It is highly unfortunate that the people are subjected to frequent power outages particularly at Iftaar and Sehri times in this blessed month. Prices of vegetables and fruits have skyrocketed. The ground situation is totally contradicting the much hyped claims made by the administration,” he observed.

He appealed to Lt. Governor Manoj Sinha to take a review of the situation and order for immediate steps to be taken for easing out the sufferings of the people. “It is highly regrettable that our administration is unable to provide hassle free essential services and regulate market prices even in this holy month and not to talk of the round the year dismal situation,” Bukhari remarked.

On this occasion, he pledged that Apni Party stands committed to the promises made with the people of Jammu and Kashmir with regard to the restoration of Statehood.

“Statehood remains imperative for the overall development of Jammu and Kashmir and the party leadership is committed to work for its restoration. We have time and again positively engaged with the Central Leadership and I firmly believe that sooner the aspirations of the people of J&K will materialize,” he said.

Bukhari said the issues of public interest shall always remain the focus of Apni Party’s agenda and for that the leadership since day one has put in its unwavering efforts.

Thanking the party leadership, the new entrants pledged to work diligently for the redressal of public grievances in their respective areas and strengthen the party at grassroots level.

Two Kashmiri students get prestigious scholarships in US and Qatar