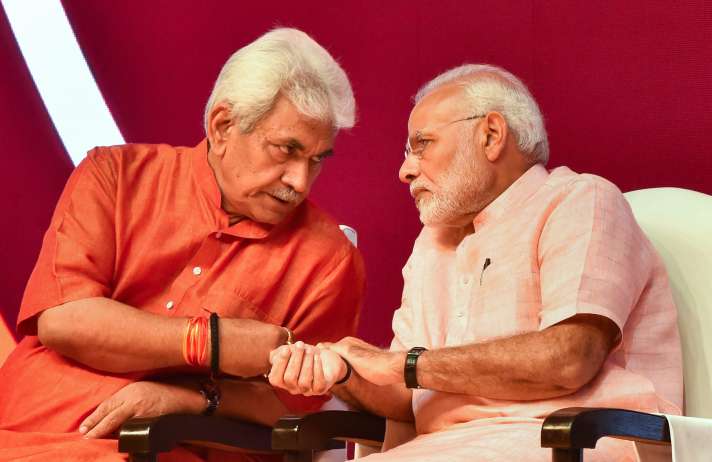 It was during the severe chill of Kashmir winter in January this year when  Prime Minister Narendra Modi  had deputed 36 union ministers to Jammu and Kashmir to start new projects and enable a new connect with the people of the Union Territory .

PM’s mission  has been taken to the next level  by  Lieutenant Governor Manoj  Sinha   and the union ministers who are expected to visit after the  Covid wave subsides  will be greeted with a pleasant surprise by the amount of the work that is being done  now.

This mission of establishing a direct connect with the people of J&K by PM at the start of this year was manifested by the union ministers’ visit who visited various places and spent time with the people, kickstarted some of the projects  and set a deadline for their completion .

Manoj Sinha has been interacting with the union ministers on a regular basis and pushing forward the agenda of development in all sectors .

The message was that Prime Minister cares and so does his government about the people of J&K, particularly the Valley. This was a unique way of doing things that J&K had not seen ever before. A large number of ministers coming in groups and visiting the places , talking to the people and laying foundation  stones of projects . It took the connect to a higher level. Unfortunately , Covid-19 played a spoilsport as the government’s attention got diverted to save the people from this deadly disease.

Despite all this, the scene is different now . The ministers, as and when they would visit , would notice the difference that the connect with the people is at a much  higher pedestal  and the languishing projects have received a new lease of life in little over six weeks’ time in Jammu and Kashmir. Some work was done before  Sinha arrived on the scene but  the speed and the spirit that he infused is unprecedented .

Manoj Sinha has brought this difference . The day he took over on August 7 , he laid bare his intentions as  head of the government that his primary objective was to establish “ dialogue with the people”. This concept was related to the revival of the democratic institutions, particularly  at the grassroots level, and in equal measure to set up forums of  interaction with the people .

The visit of the Divisional Commissioners, Inspector Generals , availability of Deputy Commissioners and SSP’s in their offices to listen to grievances of people and redress the same , and in that line the DCs  visiting sub divisional levels has introduced a new concept of governance .

Even in these pandemic-hit times, Manoj Sinha  made all efforts to  reach out to the people. In less than 24-hours , he visited hospitals in Srinagar , instructed for the recruitment of the nursing staff, and thereafter he undertook visit to  districts , where he invited people to tell him what they wanted.

This time when the Union Ministers will come , they will find in Manoj Sinha , a spokesman of the people who has initiated people-friendly programmes.

The task is harder this time because of the pandemic but that has not served as a deterrent . Manoj Sinha has  created awareness among the people how to follow the Covid-19 protocol – he has interacted with the religious preachers who wield a considerable influence among the people in his campaign to  wipe out Covid-19 .

Sinha has always maintained that for PM,   the people matter the most . Modi during his own interactions  through video conferencing or Mann ki Baat has been talking to the talented youngsters and the women who have led in their public-oriented missions in J&K .

The connect has been cemented  further..

Manoj Sinha has created a ground where the union ministers as and when they would arrive would be in for a pleasant surprise  that the landscape is transforming . It is beyond the physical work visible on the ground, it has developed a much-needed connect with the people who had always aspired for good governance .

That’s the real mission of PM for J&K, and that is being pursued tirelessly by the Lieutenant Governor and  his administration.

PM has yet again proven, he is leader of Vishwa guru India