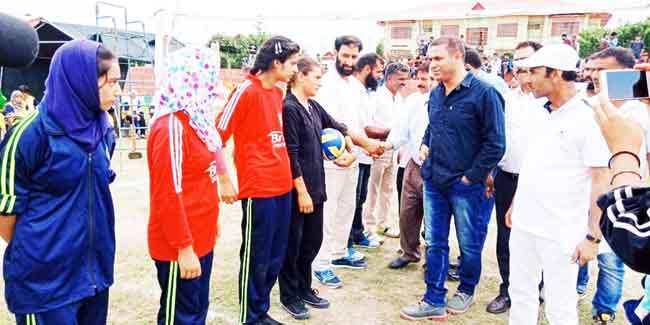 SSP Bandipora Sheikh Zulfikar Azad was the chief guest on the occasion while as, Deputy Director Youth Services and Sports, Kashmir, Haji Mirza and Chief Education Officer, Munshi Javid were also present on the occasion.

The competition was organized by the Department of Youth Services & Sports and was inaugurated by District Development Commissioner (DDC) Bandipora, Dr Shahid Iqbal Choudhary on 25th of July, 2018. About 326 boys and 300 girls from different Teams of 11 districts including Kargil were participated in these Competitions.

Speaking on the occasion, the chief guest congratulated the students for participating in the competitions. He said sports are a best activity which can groom the hidden talent of the youth and said that the government puts all-out efforts to channelize the sports talent of the youth of the district.  He asked all stakeholders to work with in tandem to get the best results on ground.

Wishing best to the guest students of all districts, chief guest distributed track suits worth Rs 1.50 lakh among winners, runner ups and third position holders. The distribution of awards was announced by the DDC on the inaugural function. Earlier, the SSP also interacted with the players.

Among others, DSPDR, A R Khan, Chairman M A College of Education, M R Bhat, officers and officials of YSS, ZEPOs, Coaches, Referees and IC activities Khursheed Ahmad Shah were attended the function.