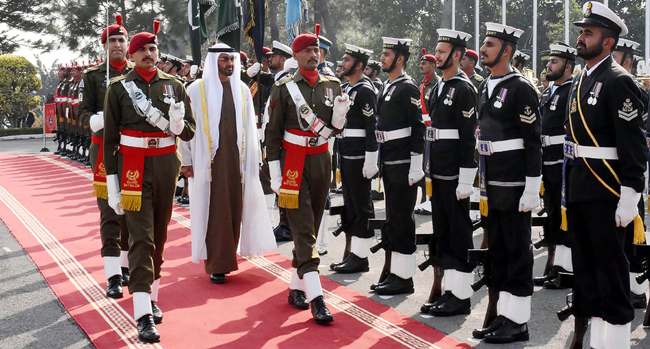 The visit included a one-on-one meeting between the crown prince and PM Imran Khan and delegation-level talks.
Islamabad, January 7:

Abu Dhabi Crown Prince Sheikh Mohammed bin Zayed bin Sultan Al-Nahyan paid a quick visit to Islamabad on Sunday ─ his first in nearly 12 years ─ and met the prime minister and other top officials as both countries seek to capitalise on the fresh momentum in ties due to a flurry of recent contacts at the leadership level.

Crown Prince Sheikh Mohammed bin Zayed, who last visited Pakistan in 2007, was given a red carpet welcome and a 21-gun salute when he touched down at Nur Khan airbase around noon today amid much fanfare in the capital. A troupe of folk musicians and cultural dancers also put on a small show to receive him.

Prime Minister Imran Khan hugged the crown prince as he stepped off the plane and then, setting aside protocol, drove him personally to PM House where a welcome ceremony was held in his honour.