“Positive involvement of police imperative for peace in the state” C.M. 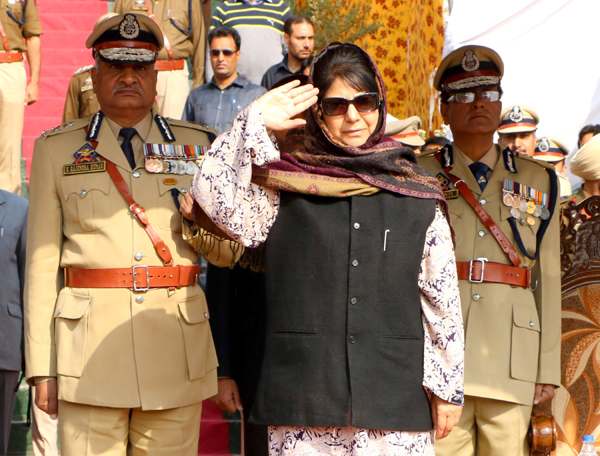 “I salute our martyrs and their families for sacrificing in the line of duty and pray for their eternal peace”, she said.

The Chief Minister said this during her keynote address on the Police Commemoration Day, where senior police officers and jawans congregated to pay respects to the martyred personnel and their families.

Referring to the supreme sacrifice of 10 gallant CRPF personnel at Hot Springs, Ladakh, in 1959 while repulsing Chinese aggression, in whose memory Police Commemoration Day is observed every year today, the Chief Minister said that our police continue to face challenges for the past three decades and the last three months, especially, have been extremely demanding for our forces.

The Chief Minister noted that our state has various complex issues, apart from simple law and order situations and added that our forces have been facing precarious situations, likedealing with violent mobs.

Acknowledging that forces have been utilizing maximum restraint while facing such violent youngsters, the Chief Minister said that theses were all our own children who have fallen prey to the unfortunate circumstances, having grown under an uncertain conflict, hence needed more parenting rather than policing.

Reiterating that the difficult decision of forming an alliance with the BJP was not merely meant to address developmental issues but also to address the core issues facing J&K in a larger perspective.  She reiterated that peace was imperative to implement the roadmap laid down by PDP Patron, Late Mufti Sahab in the ‘Agenda of Alliance’, which as a process would be taken to its logical conclusion. Such tangible initiatives at the political, economic and administrative fronts include dialogue with all the stakeholders to address the mammoth challenges confronting Jammu and Kashmir.

The Chief Minister said that violence has never helped address or resolve any situation and dialogue process was the only way out.

Referring to the visit of the All Party Delegation and her communication inviting the separatists for dialogue, which was lost in the din of violence and agitation, resulting in loss of a golden opportunity for dialogue and resolution.

Highlighting the importance of better relations between India and Pakistan, the Chief Minister said that any strain in their relations directly affects the situation in Jammu & Kashmir. It’s the common people of our state who become primary sufferers in case of any confrontation between two nuclear-armed neighbors.

While quoting former Prime Minister, AtalBehari Vajpayee’s statement “friends can be changed but not neighbours”, the Chief Minister said that uncertainty and violence on borders impacts the local population most and derails the government’s efforts for ushering in a new era of development in the state.

Referring to the internal and external peace process initiated by the former Prime Minister AtalBihari Vajpayee, the C.M reiterated her resolve to create a conducive atmosphere to take forward the peace process initiated at that time. Chief Minister said that today again with a strong mandate, Prime Minister MrNarendraModi has the opportunity to resolve the Kashmir issue in the interest of peace and stability of the State and the region. She recollected the visit of Vajpayee to Pakistan where Gen Musharraf had assured that Pakistani soil would not be used to create violence in India. This was followed not only with respecting the cease-fire on borders, that had been announced earlier, but also with decrease in infiltration and levels of militancy. She urged Pakistan to reciprocate with open mind and in good faith to the peace initiatives as was done earlier.

The Chief Minister asked the police and security forces to help in building conducive atmosphere so that issues like AFSPA revocation and dialogue, mentioned in the Agenda of Alliance could be taken forward as an when time comes.

With regard to the children who have left their homes and are suspected to have joined militant ranks or groups of stone pelting youth, the Chief Minister asked the police and security forces to guidethem back into society and save their future.

While lauding the patience of forces during these trying times, she added that any aberration or excess proven against any personnel would be acted upon.

The Chief Minister said that she was proud of the state police and desired it to be one of the most professional forces in the country. She also made announcements of career advancement on the occasion like increase in selection grade quota from 25% to 50% for Selection Grade Constables and resolve their pay anomalies. She also announced KPS cadre review and progression on lines of KAS.

While concluding her speech, she once again lauded the role of forces and sought their cooperation for restoration of peace and normalcy in the state.