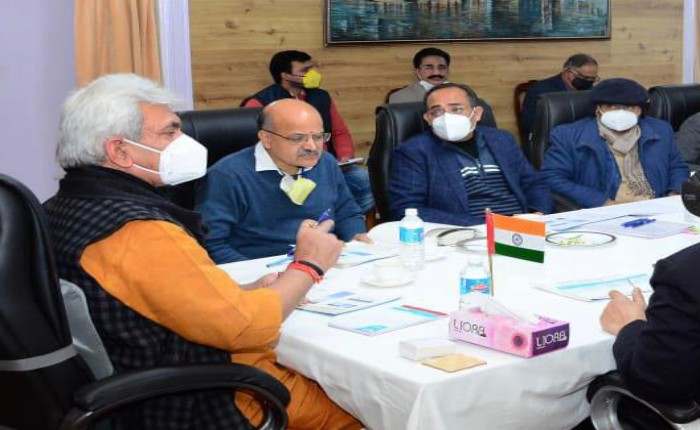 Today’s meeting was the second in a week to assess and analyze the power scenario in the UT and propose solutions for creating a robust power supply system in J&K.

Chairperson, Board of Directors, IIT Bhubaneswar and former Chairman and MD PGCIL, Dr. Rajendra Prasad Singh led the team of experts from the power sector.

A detailed PowerPoint presentation on “Path to a Healthy and Resilient Power Supply system in Jammu” was given by Former Director General, NPTI and ED Power Grid Corporation, Dr. NS Saxena.

While discussing the issues related to streamlining the power supply system, the Lt Governor laid special emphasis on using the latest technologies and models for distribution and link strengthening in critical areas.

The Lt Governor directed the concerned officers of JKPDD and JKPDC to work on war footing to identify critical issues, their probable causes and likely mitigations in order to further improve the scenario of power supply system in J&K. “Things have improved for better but it needs to be made the best”, observed the Lt Governor.

The Lt Governor also reviewed the implementation of directions and suggestions made during the previous meeting.

A threadbare discussion was held on various power related issues and short term solutions were proposed for transformer and link strengthening, augmentation of transmission and distribution system, and future course of action, besides identification of issues like pilferage, overloading, ageing of transformers and their impact on power supply.

The Lt Governor was also briefed about the series of discussions and meetings held between the team of experts with JKPDD and JKPDC officials after the last meeting held on 20th January, 2021.

Recommendations were made for focusing on immediate and short-term plans to strengthen the infrastructure to ensure improved power supply status in Jammu region to cater to peak load surge during coming summer, besides identification and aligning on critical gaps.

The chair was further informed about the extensive exploratory meetings and surveys done with the local teams on transmission sites and distribution issues.

It was informed that system strengthening is in progress under various schemes of the Government under which several 33/11 KV substations are being erected for better power supply to various under-serviced areas.