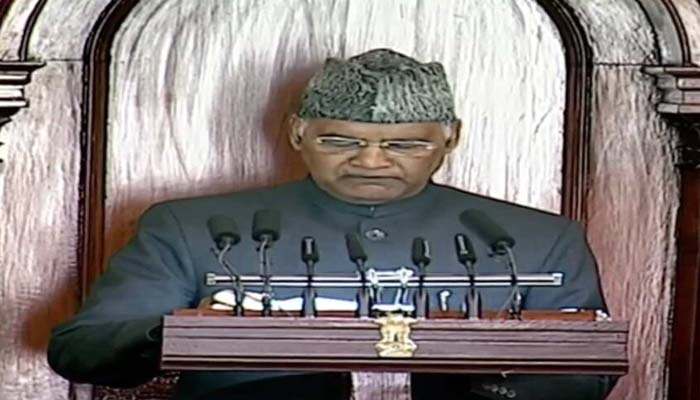 President Ram Nath Kovind  hailed Jammu and Kashmir for forging ahead toward a new democratic future after the successful conclusion of the District Development Council polls held  for the first time since Independence.

While addressing the joint session of the Parliament on Friday , the President  underscored the importance of the DDC polls and hailed these as harbingers of newer paths of democracy  particularly owing to the large-scale participation of the people.

President  said  that the Development oriented policy of  the Government has also received wholehearted support from the people of Jammu and Kashmir.

In this context , he made a special reference to elections to District Councils in Jammu and Kashmir, which, he said  were held successfully for the first time after Independence.

“Large scale participation of voters has shown that Jammu and Kashmir is forging ahead towards a new democratic future at a rapid pace.”

Grant of new entitlements have empowered the people of the region. After the implementation of ‘Ayushman Bharat Health Scheme’, every family of Jammu and Kashmir is assured of free treatment worth Rs 5 lakh.

A bench of the Central Administrative Tribunal has also been established in Jammu.

After becoming a Union Territory, elections to the Ladakh Autonomous Hill Council have been held successfully a few months back. Now the people of Ladakh are themselves taking decisions related to the development of their region expeditiously.