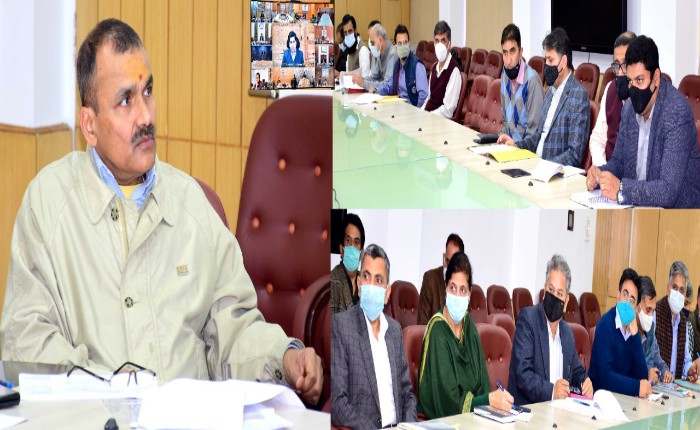 Successful digital initiatives will be implemented throughout the Union Territory: PS

Continuing the weekly review meetings on progress of digital initiatives and implementation of various departmental projects, Principal Secretary to Lieutenant Governor, Nitishwar Kumar chaired a series of meetings at the Civil Secretariat here today. The meetings are undertaken to fast track the implementation of Lt Governor’s directions for seamless delivery of public services.

Speaking to the Deputy Commissioners, the Principal Secretary sought details of mobile applications and web portals running successfully in their respective districts and the public reception regarding them. He said that the most successful of these projects would be implemented throughout the UT.

Deputy Commissioner, Bandipora informed that Mizan, the Revenue Courts App, has been functioning successfully since last couple of weeks and an additional feature of SMS alerts has been incorporated in it recently. The web based Panchayat Development Index measuring platform is also functioning and its mobile application is to be launched soon, informed the Deputy Commissioner.

From Kulgam, the Ittelah App was found to be running successfully in a closed group which is to be made available to public after initial test runs. Once launched, the application would provide the people an online platform to report any emergency situation including accidents, crimes and various others with geographical coordinates and photographs of the spot.

The GPS tracking app of district Pulwama has successfully been linked to more than 30 government vehicles, live feeds of which are monitored by municipalities for rationalisation of services. Another project, Taawun, a CSR portal, has also been launched by the district administration to create a common platform shared between the district administration, NGOs, voluntary organisations and other similar bodies.

GPS tracking projects are also being successfully run by districts Srinagar and Shopian. The e-Library app of district Srinagar is also ready with a huge repository of e-books as well as printed material.

Zimmedari App of district Doda was also found to be running. The app is a multifaceted platform aimed at improving education sector in the district.
Detailed information about the Applications Management System of Jammu administration was shared by Deputy Commissioner, Jammu. She informed that physical copies of application are digitised, uploaded onto Google Forms, and addressed to respective authorities. The status of these applications is then monitored by the Deputy Commissioner through an online dashboard. e-Rent Payment System is another successful initiative of the district administration and rental compensation of around Rs 20 crore has been transferred through the medium, added the Deputy Commissioner.

Deputy Commissioner, Samba submitted that the grievance-portal of district Samba is working successfully and facilitates the public in submitting applications for land compensation and disaster relief, besides routine grievances.

The Principal Secretary was apprised that the Sukoon App of Udhampur, since its launch has successfully helped in disbursing relief to the tune of Rs 1.75 crores under SDRF. The e-Challan application for municipalities is also being used to generate revenue successfully by the district administration.

During the meeting, the Principal Secretary called for creating an online monitoring system to keep track of functional and faulty equipment in hospitals and other health centres. He also directed Director Health Services to act on the same.

Speaking on the occasion, the Principal Secretary called for taking stern action against private companies that are causing unnecessary delays in execution of governmental projects. He also called for efficient utilisation of labour cess on welfare of labourers and their kids.

The Labour Department informed the Principal Secretary that according to directions issued, plans are being formulated for welfare of labourers and their kids. These welfare projects are to be funded by labour cess charged by the department.

The Revenue Department shared information about the ongoing digisation of Wakf records and geo-tagging of those properties.

Administrative Secretaries, all Deputy Commissioners, HODs and senior officers of various departments were present in the meeting in person and through virtual mode.