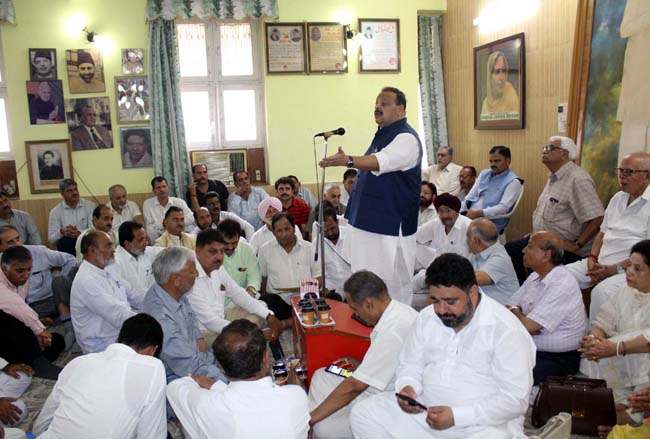 National Conference Provincial President Devender Singh Rana on Tuesday pitched for constitution of elected regional councils for three regions and sub-regions of Jammu and Kashmir, saying this will be a leap forward in realizing the larger objective of politico-economic empowerment of the people and ending the sense of deprivation and discrimination.

“National Conference has since provided a roadmap under the overall ambit of autonomy for Jammu and Kashmir within the framework of Indian Constitution, which will take care of the distinct identities of the regions and sub-regions besides aspirations of the people ”, Mr Rana said while addressing provincial office bearers besides district presidents and secretaries of National Conference here.

The meeting discussed the strategy for ensuing Urban Local Bodies, Municipal and Panchayat elections across the Jammu Province.

Mr Rana said the experiment of Autonomous Hill Council model in Leh and Kargil, saying this has worked well and could be adopted in the entire state with focus on equitable development and opportunities of progress for all. He congratulated the cadre for victory of National Conference in the just concluded elections for Ladakh Autonomous Hill Council for Ladakh. He said peoples support was biggest strength of National Conference, presence of which is in every nook and corner of the state. “Peoples unflinching faith in the party, which stands for Hindu, Muslim, Sikh, Christian and Buddhist Itehad and opportunities of progress to all, has been source of inspiration to carry forward the movement of people and channelize it for the betterment of all the three regions and their sub-regions

The Provincial President said devolution of powers at the regional and sub-regional levels will actually be accomplishment of the mission of Sher-e-Kashmir, who all his life strived for empowering people by making them masters of their own destiny. He recalled the political philosophy of Sheikh Mohammed Abdullah that people were the real fountain head of power and said this includes the empowerment at grass roots level, which can be well reflected in the constitution of the Regional and Sub-regional Councils.

The Provincial President also touched a volley of subjects, especially the ongoing machinations of diluting the permanent resident laws and said National Conference will not make any compromise with the Article 35A of Constitution of India that has been nurtured by the towering leaders during past seven decades. He cautioned against dubious stances of the BJP and urged the people to unite and foil all their divisive tactics. He said repeal of Article 35A will hurt the Jammu province most, which is why resentment is simmering against the enemies of J&K’s special status. He said the state subject laws have saved Jammu to retain its Dogra identity and withstand the onslaught of big business houses from the neighbouring states.

Exhorting the cadre to gear up for the ensuing polls for grass roots level democratic institutions, Mr Rana hoped that the people will mandate National Conference for uniformed development of the urban and rural pockets of the State.

During the meeting, the district presidents and secretaries presented their points of view about the upcoming elections and exuded confidence that National Conference emerge as the voice of the people, who are disenchanted with the politics of hate and sense of deprivation on all fronts during over three-year misrule of BJP and PDP combine.

The Provincial President announced the party decision of converting district and block committees of National Conference as election panels with respective presidents as convenors. He said the office bearers of the Provincial Committee, assigned the districts, will function as Party Observers during the period of elections.