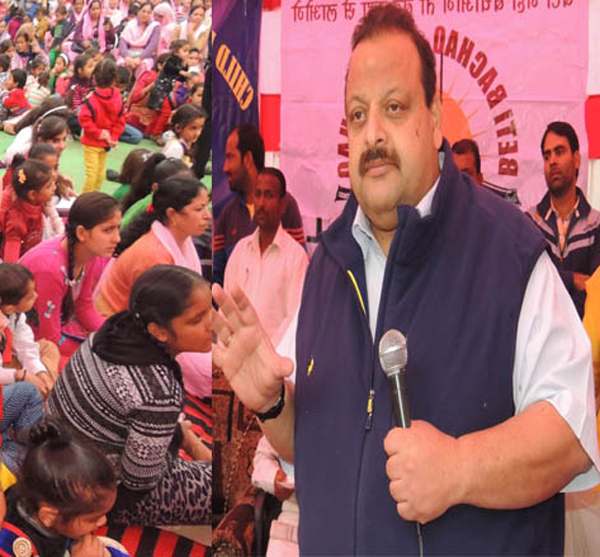 “Opportunities are needed to be provided to women, especially in rural areas, to come up in every walk of life”, Rana said while addressing a function organized by ICDS Project in connection with Children’s Day celebrations at Dansal in Nagrota Assembly Constituency.

He emphasized the need for critically addressing issues regarding women’s economic rights and participation in decision making in a democratic set-up which guarantees equal opportunities of growth to all. “Though we have traversed a long way in this regard yet much is still required to be done”, he said while pointing out huge strides made by enterprising women in every sector and even excelling men in various fields.

He particularly referred to academic odyssey of the women and said in various examinations they have been maintaining edge over boys over the years. This momentum, he said, is needed to be sustained and carried to such of the areas where girls are still lacking avenues. He said majority of distinction holders in academics constitute girls, which is inspiring. This has become possible only due to concentrated reach out across the state during past few decades to ensure girls to have access to education but still there is need for creating more opportunities for them, he added.

The Provincial President called for a multi-pronged strategy to empower women, saying while emphasis are required to be laid on the education of girl child, the school drop outs must be brought under the ambit of various welfare schemes, tailored from time to time for their welfare. In this regard, he highlighted the role of concerned governmental agencies in generating awareness on such schemes and motivating women to take up these in order to achieve the objectives optimally. “Such a campaign is more needed in rural and far-off areas”, he observed.

The MLA Nagrota said that departments like social welfare and child development can play a lead role in tackling gender disparity in the state by their intervention in areas such as economic empowerment of women and building adequate infrastructure for vocational training in rural areas. “There is immense need for bringing parity between rural and urban women”, he added.

During the function, held in connection with the Children Day, falling on ensuing 14thNovember, the children of the area presented a colorful variety programme and displayed skits on various social evils.

Rana complimented the participants and said the awareness among children about various critical issues confronted to the society is encouraging, as this will help in addressing these in a big way.