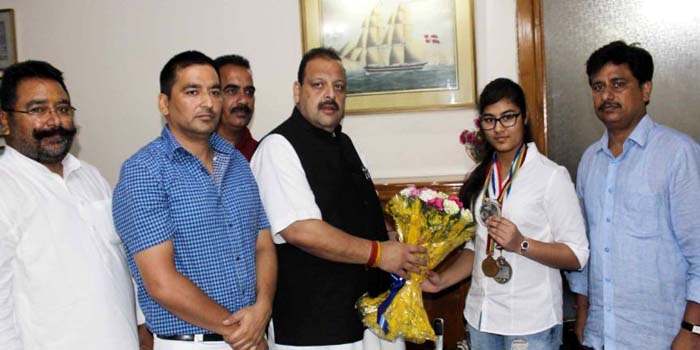 National Conference Provincial President Mr Devender Singh Rana on Monday complimented Meenal Gupta, the Commonwealth Silver Medal Winner in Under-16 Chess Championship 2018, saying she has made the country in general and Jammu and Kashmir in particular proud by her scintillating victory.

“Jammu has specially a reason to celebrate over the feat achieved by international chess sensation Meenal Gupta with a hope to see her bagging gold medal in forthcoming coming, given her grit, devotion and determination”, Mr Rana said while honouring the young chess champion here this morning.

Mr Rana had all the praise for exceptional success of Meenal Gupta and said her victory will prove as a source of inspiration for young sportspersons, especially the girls, who are giving their best to various games. He said Jammu has traversed a long way over the years with its youth making big mark in every sphere of activity—art, sports, academics and culture. He said the young girl’s win is yet another feather in the saga of successes Jammu is credited with and said there nothing to look back for young achievers, as sky is the limit for their talent.

The Provincial President and the National Conference leaders were quite impressed when told that Meenal Gupta is already credited with Gold Medal in Under-14 Category of Commonwealth Chess Championship played in Sri Lanka in 2014, in addition to various other awards. She is the ace Fide Rated Play of Jammu and Kashmir and shall be participating in the World Junior in Turkey later this year. Recently, she had defeated a strong male contender in Mumbai International event.

Mr Rana wished Meenal to top in the world event and to bring laurels for the nation and the State. He said the young sportspersons and sports lovers would be keenly watching Meenal riding the ladder of success in her chosen field of activity. “Let the years to come bring glory to the career of Meenal Gupta”, he said and congratulated her parents. He said Meenal is a brand ambassador of successful young girls of Jammu, who are excelling in every field, especially the academics. Their success is a real tribute to women empowerment and a new hope for girl child, he added.