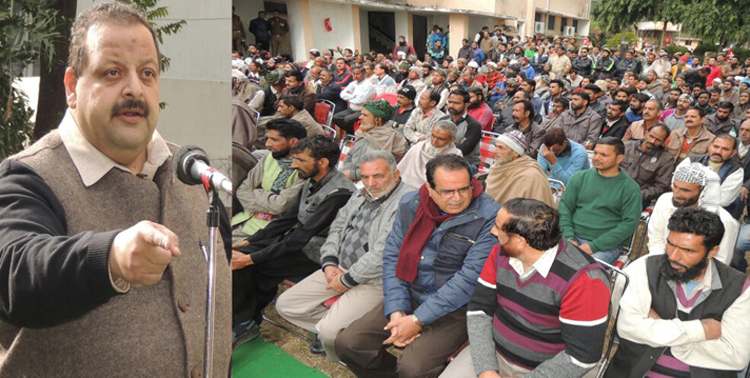 REASI, JANUARY 15: National Conference Provincial President Devender Singh Rana on Sunday slammed PDP-BJP combination for challenging the dignity of Kashmiris, the pride of Dogras and the innocence of Ladakhis to keep their irrelevant dispensation relevant and to relish the loaves of power.

“Hunger for power has taken toll of the opportunistic alliance, which is overtly and covertly working towards weakening the very idea of Jammu and Kashmir at the behest of Nagpur”, Rana said while addressing a day-long convention of National Conference here.

The Provincial President expressed concern over growing intervention of Nagpur in the day to day affairs of Jammu and Kashmir, saying this alarming tendency can have serious ramifications for the unity and tranquility of the State. “A vicious atmosphere is being generated and mistrust created by bringing the people and the regions eyeball to eyeball situation over various sensitive issues”, he said and referred to the controversies being raked up over state subject laws and presence of Rohingyas and Bangaladeshis in Jammu. He reiterated the stand of National Conference over the issue of Rohingyas, saying they should be dealt in accordance with the Foreign Nationals Act and deported to their respective countries with dignity.

On the state subject laws,  Rana said the BJP had unleashed a provocative propaganda, ignoring the historic significance of this provision and the circumstances that had led the Maharaja to enact Permanent Residence Act for safeguarding the interests of the people, irrespective of caste, creed, colour or region. “The BJP has completely failed in its sinister mission of inciting and swaying the people of Jammu, who realize the crucial importance of this legislation for their honorable survival”, he maintained.

“We decry the politics of hate and divide, as we are inheritors of Sher-e-Kashmir’s all-time relevant slogan of Hindu, Muslim, Sikh, Christian, Buddhist Unity”, he said while cautioning the people against divisive politics being played by the coalition partners which has already alienated Kashmir from the mainstream. He said the state is passing through most difficult times and if the situation is not handled with political far-sight and sagacity, the consequences could be grave not only for Jammu and Kashmir but entire country.