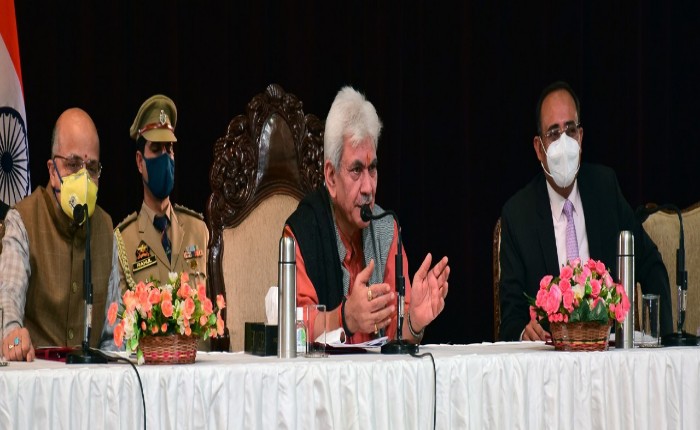 Earlier Governments didn’t move forward on Ratle Power Project because they were scared of Pakistan, says the Lt Governor

J&K witnessing unprecedented growth in every sector; we are unlocking J&K’s potential to be self-reliant in energy sector within short span of time:LG

Investment of Rs.5281.94 crore for Hydro Power Project by a new Joint Venture Company to be incorporated between NHPC & JKSPDC with equity contribution of 51% & 49% respectively: LG

· Project to be commissioned within a span of 60 months will help in providing balancing of Grid, improving the power supply position

· Direct & indirect employment to be provided to around 4000 persons

Terming it as a historical decision for making J&K power surplus UT, the Lt Governor thanked the Prime Minister Narendra Modi for approving the much awaited 850 MW Ratle Hydroelectric Project in Jammu & Kashmir at an investment of Rs.5282 Crores and ensuring the unprecedented development of Jammu & Kashmir.

Mentioning the lacklustre approach of the earlier Governments towards the execution of this important Hydroelectric Power Project, the Lt Governor said that Jammu & Kashmir was deprived of this mega project for so long because the previous regimes were scared to move ahead due to Pakistan’s threats of going to International court for arbitration, and making representation in the World Bank.

But, today the nation is under the strong and decisive leadership of Prime Minister Narendra Modi, who is taking bold decisions for the welfare of the people of J&K and has ensured that this project sees the light of the day, besides also providing Equity contribution support to the Union Territory of Jammu and Kashmir.

“J&K is witnessing unprecedented growth and development in every sector; we are unlocking J&K’s potential to be self-reliant in the energy sector within a short span of time”, the Lt Governor remarked.

Highlighting the key features of the mega project, the Lt Governor said that apart from making J&K energy sufficient, the project will create 4000 jobs in J&K, directly & indirectly, and will contribute to overall socio-economic development of the UT. In addition, the Kwar project (540 MW) has been decided to be taken up. This will result in an investment of Rs.4,264 Crores and create more than 2000 jobs in the UT, he added.

The Lt Governor observed that four more projects (Kirthai-II (930MW), Sawalkot (1,856MW), Uri-I (Stage-II) (240MW) and Dulhasti (Stage-II) (258MW) involving an investment of Rs.31,000 Cr have also been decided to be taken up for construction. These projects together with the two ongoing projects of Pakaldul (1000 MW) and Kiru (624MW) on Chenab river and its tributaries will result in an investment of about Rs.52,821 Crores and create more than 12000 jobs in the Union Territory.

To train the local people, the Ministry of Power / Ministry of Skill Development propose to set up training centres near the project sites in collaboration with NHPC Ltd, so that they can be employed in the projects, observed the Lt Governor.

Since independence upto the year 2018, projects of only around 3500 MW had been set up in J&K. Against this, our Government has taken up projects with capacity of 6300 MW to be set up in the UT in the next five years. This is double the installed capacity set-up since independence, he added.

This will make UT of J&K self reliant in power; lead to faster growth and development of UT of J&K and create a minimum 12000 jobs directly and indirectly. Such large scale investment has never happened in the past, the Lt Governor maintained.

· Investment of Rs.5281.94 crore for 850 MW Ratle Hydro Electric Project located on river Chenab, in Kishtwar district of Union Territory of Jammu and Kashmir, by a new Joint Venture Company to be incorporated between NHPC and JKSPDC with equity contribution of 51% and 49% respectively.

· Government of India is also supporting the Union Territory of Jammu and Kashmir by providing grant of Rs. 776.44 crore for Equity contribution of JKSPDC in the JVC to be set up for construction of Ratle HE Project (850 MW). NHPC shall invest its equity Rs.808.14 crore from its internal resources.

· The Ratle Hydro Electric Project shall be commissioned within a span of 60 months. The Power generated from the Project will help in providing balancing of Grid and will improve the power supply position.

· Government of Union Territory of Jammu and Kashmir, to make the Project viable, will extend exemption from levy of Water Usage Charges for 10 years after commissioning of the project, reimbursement of State’s share of GST (i.e. SGST) and waiver of free power to the State in a decremental manner, i.e., the free power to the State would be 1% in the 1st year after COD and rising @1% per year to 12% in the 12th year.

· The construction activities of the Project will result in direct and indirect employment to around 4000 persons and will contribute in overall socio-economic development of the Union Territory of Jammu and Kashmir. Further, Union Territory of Jammu and Kashmir will be benefitted with free power of around Rs. 5289 crore and Rs.9581 crore with Water Usage Charges from Ratle Hydro Electric Project, during Project life cycle of 40 years.

Prominent among others, present on the occasion were BVR Subrahmanyam, Chief Secretary and Rohit Kansal, Principal Secretary, Power Development Department and Information Department, besides senior officers of Civil Administration.