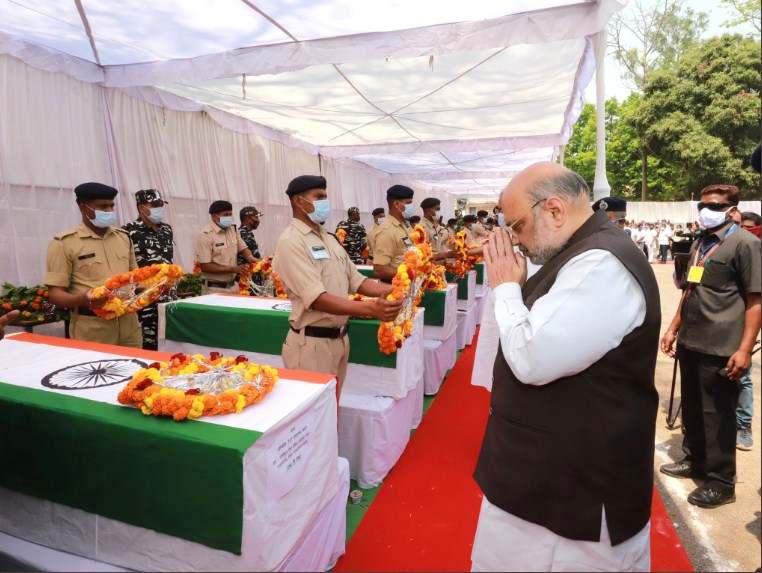 Home Minister Amit Shah’s solemn pledge  that the country will achieve victory over the forces of destruction and terror  when he paid rich tributes to the CRPF jawans who made supreme sacrifice while fighting armed Naxals last weekend.

Home Minister’s resolve and form words brought about the first victory- the release of COBRA Commando  Rakeshwar Singh Manhas, who hails from Jammu of the union Territory  of Jammu and Kashmir.

The Home Minister’s words had a salutary effect – the Naxals released  Rakeshwar Singh on Thursday , bringing  relief not only to his family in Jammu, but also to the whole nation that had been waiting anxiously for the outcome of the hostage episode .

This is where the words matter , and also who says these words.

Home Minister’s straight talk made it clear that  while the Narendra Modi government would take care of the people  and their needs which they have been deprived of , but if the fire arms would be used to settle the issues, the government would have to do the same.

This was a combination of  soft and hard message. Soft for those who believed in peace . They were promised all help and basic facilities that they had been longing for decades . This inspired hope and  promise. It carried  bigger promise that the Modi government will deliver on its pledges and promises  s it has done in the rest of the country, and particularly Jammu and Kashmir.

The hard words were meant for those who spawned and sustained violence  to instill fear among the people to highlight their troubled mindset . There would be a bullet for bullet.

Naxals appeared to have got the message that their stance of violence or doing harm to Rakeshwar Singh could prove suicidal for them, that’s why they chose not to harm the Jawan in their captivity. First, they released his picture to show that the captive was alive , next they released him.

This is how the terrorism and violence can be tackled. Amit Shah has shown the way.