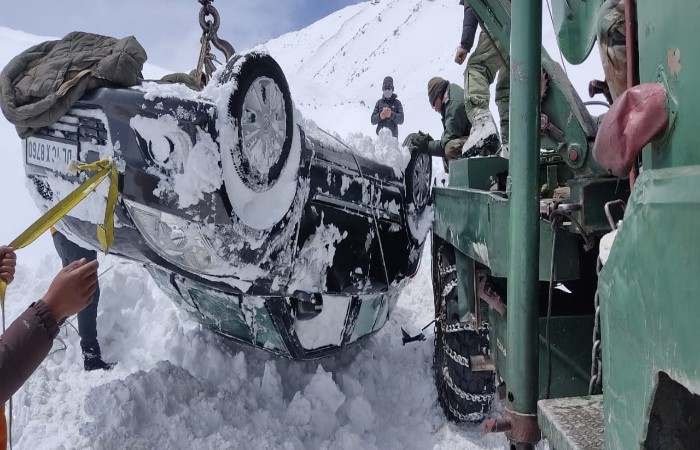 On the evening of 21 April 2021, due to heavy snowfall, vehicle traffic was disrupted along the route from North Pullu – Khardung La Top – South Pullu leading to civilian vehicles getting stranded near Khardung La Top and North Pullu. The Indian Army troops of the Siachen Brigade immediately launched a rescue operation to extricate the stranded civilians.

At a distance of 5 Km from North Pullu towards Khardung La Top, three vehicles were stranded between snow slides and one vehicle had overturned. Indian Army detachments from North Pullu alongwith the Avalanche Rescue Teams cleared the snow slide and rescued eight civilians from the site. After checking their health parameters at North Pullu, few civilians who were from nearby Khardung Village were dropped off to their respective houses and the remainder were accommodated at Khalsar.

At Khardung La Top, a total of 10 civilians and one Scorpio, one Civil Gypsy and a mini bus were rescued. They were provided immediate first aid and medical screening was carried out to check their vitals. All these civilians were provided food and accommodation from within the limited resources available with the Indian Army detachment at the site.

The timely and bold actions of the Indian Army in extreme weather saved precious human life and was well appreciated by the locals.