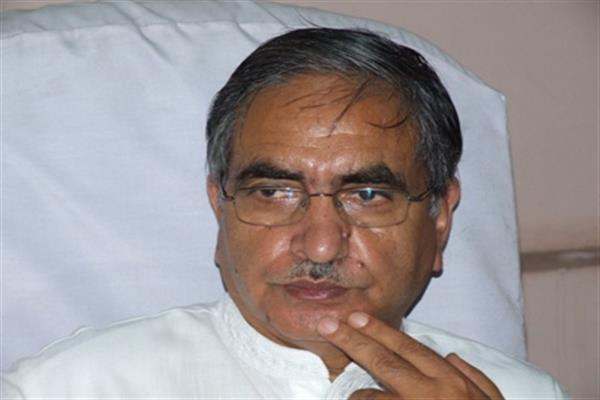 Jammu and Kashmir Apni Party (JKAP) senior leader and former minister Ghulam Hassan Mir on Monday reiterated his party’s call for restoration of Statehood to J&K terming it inevitable to address the growing disconnect between the people and the present dispensation.

Mir was addressing his party colleagues, after inaugurating JKAP office at The Bund, Lal Chowk in Srinagar.

In an hour-long session which witnessed strict implementation of social and health protocol in light of COVID-19, Mir deliberated upon the major contours of Party’s policies aimed at providing relief to the people of all the regions and sub regions of Jammu and Kashmir.

He said the vision of JKAP president Syed Mohammad Altaf Bukhari that culminated into launching of a new political platform to the people of J&K is open to all likeminded people who want to serve their State with utmost sincerity and dedication.

“It is a very auspicious occasion that we are inaugurating the Apni Party office in Srinagar just a week after we inaugurated our party office in Gandhi Nagar Jammu,” Mir said, adding that it puts a lot of responsibility on JKAP workers as the expectations and challenges are huge.

He however, assured that the Party’s political will is strong enough to surmount all the challenges that may come in its way for safeguarding the interests of people of Jammu and Kashmir.

“After August 5, a lot has changed in the political scene in J&K. People are in despair as their economic conditions have got badly affected,” Mir said, adding that amid this political uncertainty, the COVID pandemic has added to the sufferings of people and in that view, challenges are very huge.

“JKAP’s endeavour shall be to put in its relentless efforts to restore the socio-economic and political stability in this region,” he remarked.

Mir said the main focus of JKAP revolves around politics of development and that the outfit will have representatives from across Jammu and Kashmir to implement its vision.

“There was a general feeling among people about the absence of a credible voice that could take up their issues and get them sorted out. I am of the firm belief that JKAP has filled that political vacuum and would come up to people’s expectations,” he stressed.

He said that the party believes in building bridges across the regions and sub regions in J&K and would always strive for mutual cooperation among the people so that the State of J&K touches new heights in the overall developmental index of the country.