Sarpanch shot dead by militants in Jammu and Kashmir’s Anantnag

The victim, Ajay Pandita Bharti, was the sarpanch of Lukbawan village in the Larkipora area.

A sarpanch was shot dead by militants in Jammu and Kashmir’s Anantnag on Monday. The victim, Ajay Pandita Bharti, was the sarpanch of Lukbawan village in the Larkipora area. The 40-year-old village leader was a member of Congress party.

As per the police statement, the crime took place at around 6 pm near the sarpanch’s house. “Officers attending the terror crime spot learnt that Ajay Pandita was shot at by the terrorists near his house. The injured has received grievous gunshot injuries and was shifted to a nearby hospital for treatment where he succumbed to his injuries.” 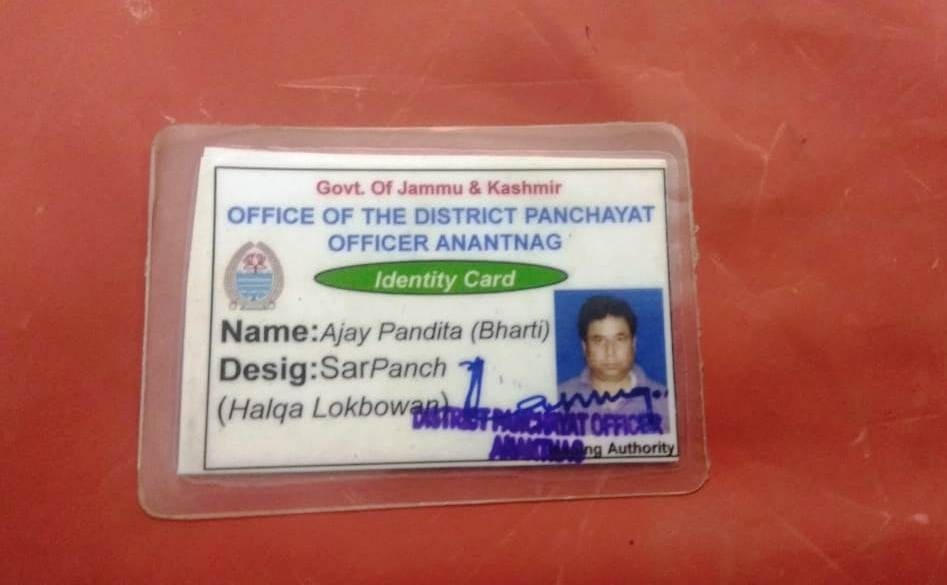 The Anantnag police have registered a case regarding the incident under relevant sections of law. “Investigation is in progress and police continue to work to establish the full circumstances of this terror crime. Area has been cordoned off and a joint search by police and security forces in the area is going on to nab the terrorists,” the police statement said.

The incident has been condemned by several political leaders in Jammu and Kashmir. Former chief minister Omar Abdullah said that he was sorry to hear about the incident. “Very sorry to hear about the killing of sarpanch Ajay Pandita in Anantnag earlier this afternoon. I unequivocally condemn this terror attack on a grassroots political worker & pray that his soul rests in peace,” Omar Abdullah tweeted.

Iltija Mufti, former CM Mehbooba Mufti’s daughter, also condemned the incident via her mother’s social media account. “Terrible news.Condolences to the family. Shrinking political space in Kashmir has made political party workers all the more vulnerable. They are stuck between punitive actions of a vindictive government & militants on the other end,” Iltija Mufti said on Mehbooba Mufti’s Twitter account.

Terrible news.Condolences to the family.Shrinking political space in Kashmir has made political party workers all the more vulnerable.They are stuck between punitive actions of a vindictive government & militants on the other end https://t.co/NFvz1lswOA

Meanwhile, J&K BJP Chief Ravinder Raina and Sofi Yusuf also issued statements condemning the sarpanch’s death. Sofi said, “The enemies of humanity don’t belong to any religion they can’t see peace and development and even in these times of pandemic they are doing these inhumane acts and are killing the local representatives who are on ground to serve the people during these tough times.”

He further said these kinds of acts will not weaken our morale of the people, “We are here for the development and betterment of our people. My heartfelt condolences and sympathies with bereaved family and prayers for the peace of the departed soul.”