School burnings in Kashmir: Mainstream is more guilty  than others 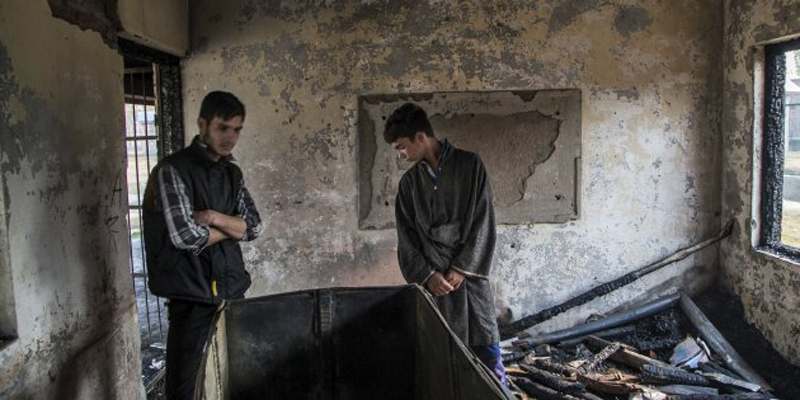 A singular tendency among   a many sections is to blame Pakistan and separatists for everything that goes wrong – that is true to a large extent. But in the latest episodes of schools being set afire in Kashmir , the dubious role of the mainstream parties  is equally reprehensible .

The mainstream parties cannot  escape the responsibility  of  having failed to play their role  of standing up to the  miscreants  and exposing designs of the  inimical forces, which got an opportunity to  put Kashmir on path of self-destruction.

The ruling PDP and the main opposition National Conference in Kashmir were playing games against each other , offering a direct and indirect   support to separatists and all others who were  bent upon  paralyzing the life in Kashmir . The killing of a militant commander Burhan Wani  on July 8  became their  icon as much as it was for Pakistan and  separatists like Syed Ali Shah Geelani , Mirwaiz Umar Farooq and Mohammad Yasin Malik.

Separatists and Pakistan were looking for something  extraordinary to  ignite the flames of unrest . The killing provided them  a unique  “ martyr” of the social media era to  fuel the unrest which they had failed  in the past because of the dominant  economic and social harmony interest of the people  when tourist footfalls were  unprecedented and  Kashmir was being profiled as the best place to visit in the 2016 summer , but no one knew that it would soon turn into a chilling  winter.

How did it happen?   A live wire situation was being built  by separatists and the mainstream (, PDP , included , decrying  all  the ideas of resettling  migrant Kashmiri Hindus who had fled  in the  wake of the  selective persecution in late 1980s and early 1990s.,  proposal of setting up of  a colony for the state subject ex-soldiers , and  all swords were out to cut a  investment friendly and employment generating  industrial policy .  In short, it was a resistance to the idea of India, which Islamabad , its  amplifiers in separatists, National Conference, Congress, CPI-M and , of course, PDP, thought would get germinated with BJP  sharing power in the  PDP-BJP  government.

The strong wall of resistance to such ideas in the past Mehbooba Mufti had re-chosen BJP as alliance partner  after  nearly a  three-month long wait  after the death of her father and sitting Chief Minister  Mufti Mohammad Sayeed. .

Today  all are blaming   unidentified miscreants for the  burning of schools and the chaos that has prevailed in the  Valley. A big blame game is going on . Separatists who found  the merit in the locked schools because  the “ real education  was  a distinction between good and bad”. Geelani felt that the  larger goal for ( freedom) was more important than   attending class rooms. Chief Minister Mehbooba Mufti accused the vested interests in “ keeping the children off schools so as to recruit them as stone throwers and wreck their future.”  Her predecessor Omar Abdullah was unsparing in his criticism of the Mehbooba Mufti government, never spoke a word against the stone throwers , but when the schools started burning, he  declared “ this in unacceptable.” Geelani and Mirwaiz changed their tune. Now those burning schools were “ not part of the movement.”

Kashmir is not new to such reversal  in expressions, but the fact remains while there can be some clue that why separatists were   saying it and patronizing the  miscreants in the name of “ freedom struggle against the “ Indian occupation.”

In hindsight, two things become very clear that the killing of Burhan  was  made a  turning point deliberately . Separatists and Pakistan had the compulsion to own a  popular figure  on social media who had a special  appeal among the youngsters , the mainstream  helped them  by flip-flopping  on the issue.. Chief Minister  was willing to “ give Burhan a  chance had the forces known that it was he who was among the holed up militants.”  She was also making a sort of distinction  between the popular militants and others.  Omar  was quick to tweet that “ Burhan n death would be recruiting more militants than his life.”  A host of questions were raised by all others, including  some of the ministers , about the circumstances in which  Burhan was killed, granting an extra spotlight on Burhan, who was hailed as “ a martyr” and  “ young leader of Kashmir” by  Pakistan premier  Nawaz Sharif at  UNGA .  This thrilled Kashmiris that for the first time a militant’s name was  placed on record in the United Nations General Assembly.

The mishandling of the situation on July 8 and 9 , if it was so , could  have been reversed had there been political will and the situation would not have reached a point where schools were going up in flames. Mainstream failed Kashmir and Kashmiris more than anyone else .