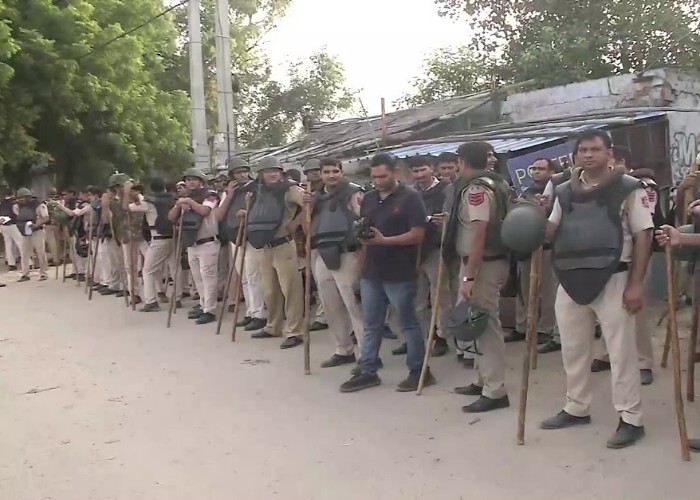 The Delhi Police have tightened security in the national capital, especially at Jantar Mantar, where farmers are set to hold a protest today.

For the day, the Delhi Police have put up cemented barricades and have tightened security at the Delhi-Haryana Tikri border.

Meanwhile, farmer leader Rakesh Tikait was on Sunday detained by the Delhi Police at the Ghazipur border while he was trying to enter the national capital to take part in the unemployment protest at Jantar Mantar.

He alleged the Delhi police was working at the behest of the Centre and did not allow him to meet the unemployed youth.

A Delhi Police official said Tikait, the national spokesperson for the Bharatiya Kisan Union (BKU) and a prominent face of the Samyukt Kisan Morcha (SKM), was stopped at the border around afternoon.

“Thereafter, he was detained and taken to Madhu Vihar police station where police spoke to him and requested him to return,” Special Commissioner of Police (Law and Order) Dependra Pathak said.

The DCP said Tikait “agreed” with the police request, and was “escorted back”.

The SRAS said in a statement that Tikait, who was coming to participate in the movement, was stopped by the police at the border.

Police sources said Tikait was detained as the Delhi police was trying to prevent “undue gathering” in the national capital.

Earlier on August 18, the Samyukt Kisan Morcha (SKM) – an umbrella body of farmers, had announced a three-day stir in Lakhimpur Kheri of Uttar Pradesh, to press for their pending demands.

The leaders said their agitation started with the arrival of farmers from Punjab, Haryana, Rajasthan, Madhya Pradesh, Tamil Nadu, Kerala and different parts of Uttar Pradesh from Wednesday night.

Lakhimpur Kheri is represented in Lok Sabha by Mishra, the Union Minister of State for Home.

His son Ashish Mishra is an accused in the violence that took place on October 3 last year in which four farmers and a journalist were among the eight people killed.

Earlier on July 31, farmers in Punjab had blocked the railway track at Vallah in Amritsar, Bathinda and protested at Shambhu toll plaza in Ambala, Panchkula’s Barwala and Kaithal’s Cheeka against the Union government for not fulfilling their demands.