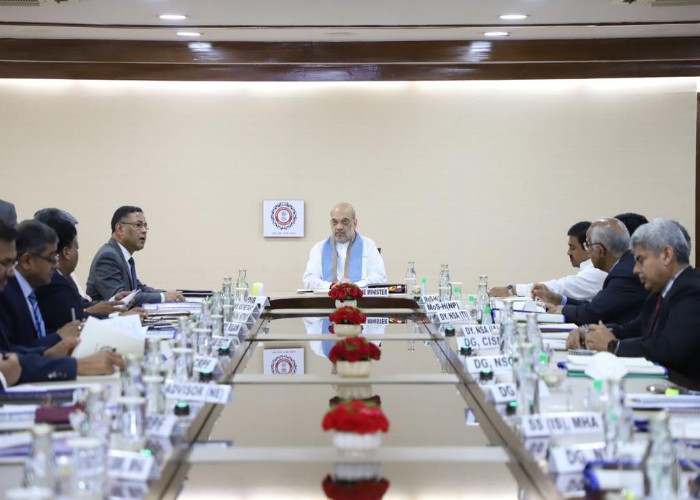 The ways of devising national security strategies , especially in a vast country like India where multiple challenges have been visiting in various manifestations to its security , has changed dramatically. The approach is changing, and it has delivered good results, but that is not the goal in itself as the newer challenges and threats have come to fore over the years from the external and internal forces .

The Prime Minister Narendra Modi’s initiatives and efforts have come a long way in checking and eliminating the security threats , but there is more to be done . the two-day deliberations at the Conference, dwelt at length at the urgent issues, measuring the success level, and the tasks head. There were brainstorming sessions which have sketched the road ahead to be traveled to achieve all the goals in countering terrorism, drug menace, and unravelling all the behind the or beneath the visible surface activities of the inimical elements.

The Conference put on record PM’s commitment to national security It is a matter of record that Prime Minister er Narendra Modi has devoted much of his government’s attention to the national security and strategies to attain peace in the country and ward off all threats. This commitment of securing nation at all costs has helped the country attain a great degree of success in countering the threats, but given the ill-intentions of the hostile foreign powers and inimical forces within, there is a need to change the strategies accordingly.

At National Security Strategies Conference , Union Home Minister Amit Shah gave a call for changing the thinking and action on the strategies to be adopted to make the nation secure in all senses of the word. Coordination and Cooperation among all the stakeholders , especially among the DGsP is a must travel path to ensure better security and success of the strategies .

Amit Shah’ has underlined several guidelines, and his emphasis on the “fundamental principle of modern-intelligence should not be ‘need to know’ but it should be ‘ need to share and ‘ duty to share’ because unless we change our approach , we would not be able to attain success “, And there was an added thrust on the approach that , “ We must focus on technical intelligence with the human intelligence.”

A look at the country’s map reveals that there are problems in certain geographies – Kashmir, north-east and the Naxal-hit areas- and there also are threats that have emerged because of the groups joined by their ideology to create troubles . These are recurring problems , though massive efforts made by the government to eliminate these threats have made the country’s environment secure , in which the people can breathe easily and go about their normal lives undisturbed by the troubles of the past.

Kashmir is a classic example as to how the things have changed . This success is not only due to the diminishing number of terrorists , but in denying them the ecosystem which used to help them to survive and operate . The government did two things – it struck against the fountainhead of the terrorism across the border . The most striking message came in aerial strikes deep into Pakistan to destroy terror training camps in Balakot in Khyber Pakhtunkhwa in February 2019 . That buried forever the Pakistani plans to repeat February 14, 2019, Pulwama terror attack.

It gels with the theme elaborated at the NSS conference that this is a war for the country and the future of youth. “ We must fight fight unitedly and single-mindedly to win this war. ,” Shah said underlining that how the coordinated strategies can deliver goals which will meet the future needs of the national security.

Big take aways from Home Minister’s address at the conference shed light on various initiatives envisioned by the Prime Minister towards strengthening the security apparatus of the country. , encompassing the PM’s consistent efforts “ to bring to bring improvement in the DGP Conference,” and an analysis of which revealed that how the nation has been “successful in finding solutions to various problems.”

The guidelines so drawn are :

• All States should give top priority to the issues related to the national security. This is a war for the country and for the future of youth. We must fight unitedly and single-mindedly to win this war.
• Instructions to the DGsP of the bordering areas to keep a close watch on the demographic changes occurring in the bordering areas.
• It is the responsibility of the DGsP to ensure that all information of technological and strategic importance was percolated down the line, particularly in the border districts.
• After becoming the Prime Minister in 2014 Narendra Modi had not only given thrust on internal security, but had also strengthened the system to face the challenges.
• On the internal security front, we had been successful in containing three perennial problems, terrorism in Jammu & Kashmir, various underground groups in North-East and Left Wing Extremism. Under the leadership of Narendra Modi, Shah underscored ,” we have enacted new laws, improved coordination with States, enhanced budgetary allocation and ensured maximum use of technology. “
• For the first time the country had developed a system in the form of National Automated Fingerprint Identification System (NAFIS), and it must percolate down the line.
• Seizure of the consignment of drugs is not enough., as there is an urgent need to “strive to annihilate the entire drug-network and to reach its source and destination is important.
• Need for detailed analysis of good cases investigated by the States.
• District wise regular meetings of National Coordination Centre ( NCORD ) must be ensured and the people down the line must use it. The Prime Minister had initiated technology mission and to ensure its success, we must make efforts that it reached down the line.
• Central Government had been preparing a database of different crimes.
• For the first time in the country, work had been initiated on several front with scientific approach. We must utilise 5G technology to strengthen the security apparatus.
• The fundamental principle of modern intelligence should not be ‘need to know’ but it should be ‘need to share’ and ‘duty to share’ because unless we change our approach, we would not be able to attain success.
• We must focus on tch intelligence as also human intelligence
• This conference helped in making young officers aware about issues pertaining to national security. During the course of the two day conference which concluded on August 18, the sessions selected for deliberation were relevant and important. During these two days, these issues were deliberated upon