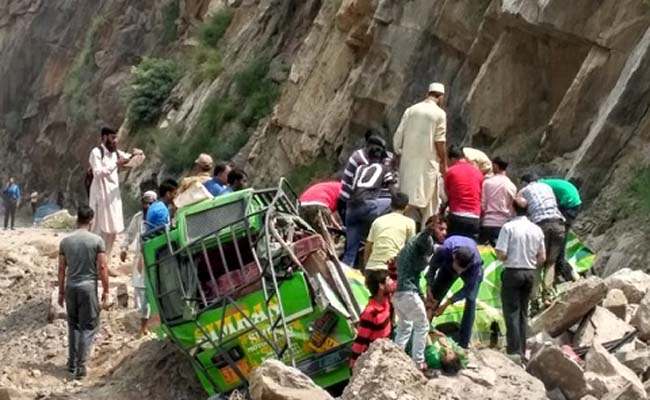 Seven persons, including a policeman, were killed and 12 others injured today as the two vehicles they were travelling in, came under a massive landslide on Doda-Kishtwar highway in the district, a senior police officer said.

A mini bus and a car plying on the road were hit with massive boulders and debris, which came tumbling down a hillock at Kulligad at 10.45 am, Senior Superintendent of Police Rajinder Kumar Gupta told PTI.

Gupta, who led the rescue operations, said seven persons were killed and 12 others were injured in the incident.

The condition of one of the injured, Kalyan Singh, was stated to be critical, he said, adding he has been referred to a hospital in Jammu for specialized treatment.

Identifying four of the deceased as Constable Kewal Kumar, Udhampur residents Askanta Devi and Amar Singh and Doda native Mohammad Hussain, Gupta said the efforts are on to identify the three others killed in the landslide.

The police officer said some of the passengers in the two vehicles were heading for the Paddar valley to join the ongoing Machail yatra.

District Development Commissioner Angrez Singh Rana announced an ex-gratia relief of Rs four lakh each to the next of kin of the deceased persons.

The injured persons would also be given assistance as per the norms, Rana said, adding the local administration was “very prompt” in providing help to the victims.

He said some of the victims had come from Udhampur district for the yatra.

The 43-day Machail yatra started on July 25 and so far over 1.50 lakh pilgrims have paid obeisance at the goddess Durga shrine.

Rana, meanwhile, added that the debris on the Doda-Kishtwar highway has been cleared and traffic on it has been restored.