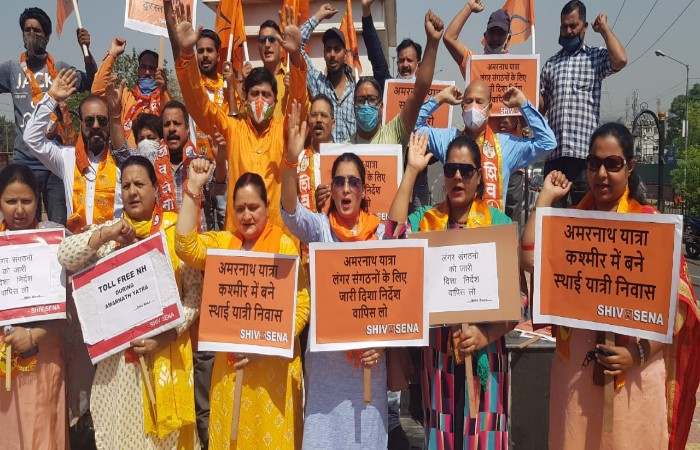 Shiv Sena Bala Saheb Thackeray Jammu and Kashmir unit,  welcome the  registration process of Amarnath Yatra and appeal the devotees to  become a part of the  holy yatra in large number and receive the blessings.

Along with this, Shiv Sena leaders  appeled  to take appropriate steps regarding the facilities of the Amarnath devotees Dozens of party leaders led by Manish Sahni President UT J&K , Performed silent protest with the demands of

Addressing the media persons, Manish Sahni, said that it is unfortunate that government is not doing much to make national highway safe as it is relying on the upcoming four-lane project.  He said that it is the duty of government to make existing road safe and ready for vehicular

Along with this, the Jammu and Kashmir National Highway should be made toll free during the Holy Amarnath Yatra. He said that there are  toll plaza at five places from Lakhanpur to Kashmir.  Which is an additional burden on devotees. Sahni also appealed  to open the Banihal Qazikund tunnel for the Amarnath pilgrims.

Sahni further said that the time has come to build  permanent Yatri Niwas at Baltal, Srinagar , said that in 2008 it was announced to give 40 hectares of land to the Amarnath Shrine Board for establishment of permanent accomodation.

Along with above Sahni  appealed to immediately withdraw the guidelines issued for the anchor organizations. Sahni said that  memorandum regarding the above demands has been sent  to Home Minister, Hounrble  Amit Shah & Hounrble Manoj Sinha, Lieutenant Governor J&K.