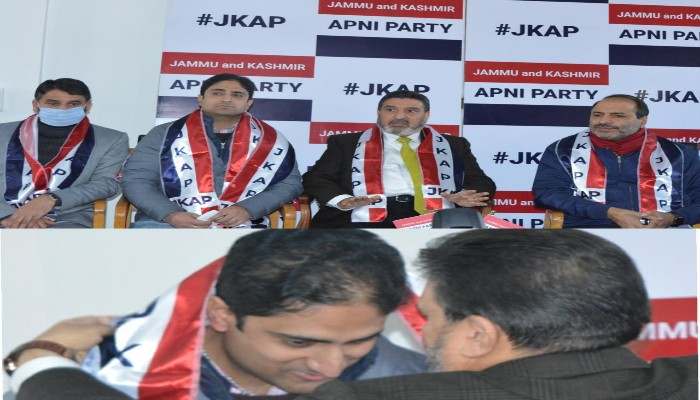 Altaf Bukhari welcomes him into the party fold

While welcoming him, Bukhari said Mattu would get all possible support from the Party cadres and functionaries in serving the people of Srinagar city. He pledged that the Apni Party’s will always be on equitable development of the entire Jammu and Kashmir especially the twin cities of Srinagar and Jammu.

“I hope that Mr. Junaid Mattu will first focus on counter measures to stem the spread of COVID-19 and would start a new era of holistic development of all wards and constituencies of Srinagar City especially focusing on restoration of pristine glory of Shehr-e-Khas,” Bukhari observed.

He said that Apni Party will have a zero tolerance for corruption and would ensure that there is no discrimination in development of wards and constituencies in Srinagar.

He said that he was happy at Mattu’s joining the Apni Party and could see a bright future for him in the political field. He said that many other corporators would be joining the Party in coming days for which a grand ceremony would be organized.

Thanking Apni Party leadership for the faith and confidence reposed in him Mattu said that his joining was motivated by certain eye-opening realizations including gimmickry adopted by the traditional political parties in the region.

“Mr. Altaf Bukhari is not only a humble human being but a visionary leader who believes in action rather than in words. I could see Apni Party is a dependable political platform that believes in pragmatic approach and delivery on the ground,” said Mattu.

He said the unrealistic and marketing-gimmicks of so called tall political leaders need to be countered with the truth. “The pragmatic approach of the Apni Party is what convinced me to work under the leadership of Altaf Bukhari sahib. His brilliant performance as a minister in the previous elected government was acknowledged by one and all including his political opponents in the legislative assembly,” he observed.